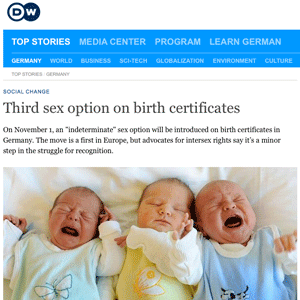 For many activists, a more pressing concern is that doctors are allowed to perform cosmetic surgery on infants to make ambiguous genitalia conform to the male or female standard…

Morgan Carpenter, President of the Organization Intersex International Australia, said another category on birth certificates won’t improve the lives of intersex people, and the focus should instead be on ending cosmetic surgeries on infants, and introducing anti-discrimination legislation.

“The fact that the [German] government is introducing a new status for children in terms of their sex status, while not protecting them from discrimination and adverse consequences, I think that that’s horrendous,” he said.