The Diagnostic and Statistical Manual of Mental Disorders (DSM-V) of the American Psychiatric Association proposes to reclassify those intersex people who reject their erroneous sex assignment at birth as mentally ill, ensuring that many intersex people will be classed as both mentally and physically disordered (that is, diseased, sick or ill). Such intersex people are to be included in the DSM-V’s section on Gender Dysphoria.

Opposition to the notion that intersex people are mentally ill for rejecting their birth sex assignments continues to build.

The BPS is just one of many such professional organizations to point out major concerns with the DSM-V. 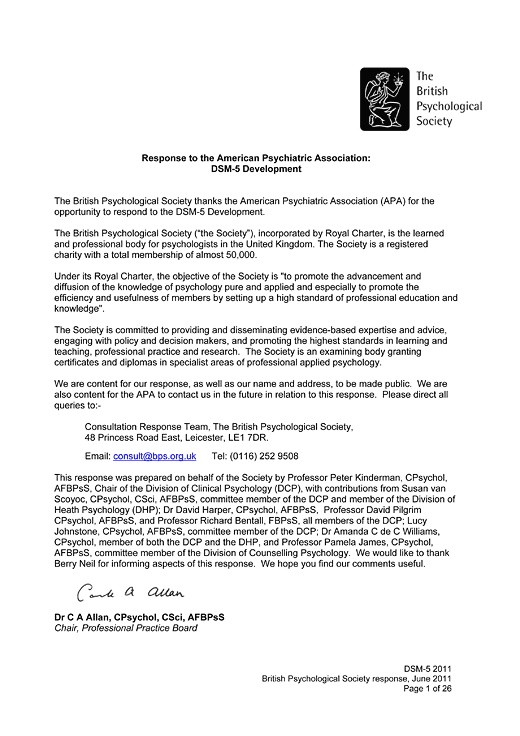 The World Professional Association for Transgender Health, Inc. (WPATH) has released its Standards of Care for the Health of Transsexual, Transgender, and Gender Nonconforming People, Version 7, without any consultation with intersex organizations and people and has decided to throw in its lot with the APA and its DSM-V.

The British Psychological Society (BPS) seems to agree with us, as follows (emphases are our own):

As stated in our general comments, we are concerned that clients and the general public are negatively affected by the continued and continuous medicalisation of their natural and normal responses to their experiences; responses which undoubtedly have distressing consequences which demand helping responses, but which do not reflect illnesses so much as normal individual variation.

We believe that classifying these problems as ‘illnesses’ misses the relational context of problems and the undeniable social causation of many such problems. For psychologists, our well-being and mental health stem from our frameworks of understanding of the world, frameworks which are themselves the product of the experiences and learning through our lives.

All the comments made earlier apply also here.

Of particular concern are the subjective and socially normative aspects of sexual behaviour. We are very concerned at the inclusion of children and adolescents in this area. There is controversy in this particular area – the concept of a ‘diagnosis’ of a ‘psychiatric disorder’ disputed.