The Sydney Morning Herald yesterday carried a story by Steve Dow on Norrie’s campaign for “legal recognition as a person of no specified sex”. Born male and transitioned to female, before choosing a middle path, the article presents Norrie’s personal journey.

OII Australia believes that anyone should be able to choose a “not specified” sex or gender marker on official documents, so we wish Norrie well with this case. OII Australia is not in favour of a third gender designation for intersex people, but an open, self-declared “not specified” category would suit a wide range of people. 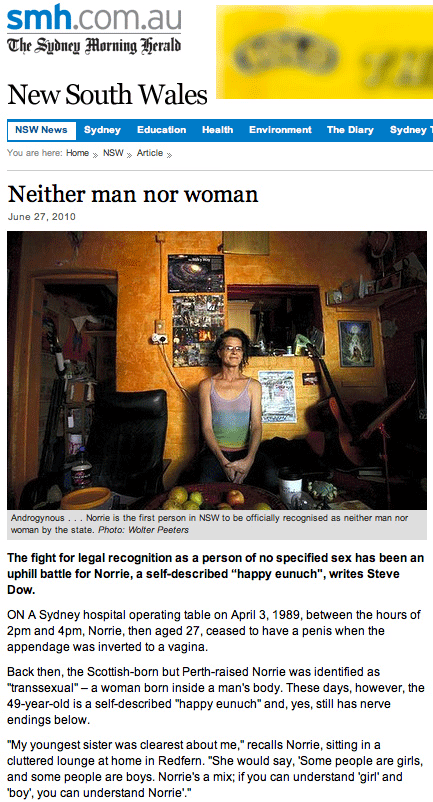 Norrie is the first Australian to have been issued with a non-gender-specific identification document to replace an existing birth certificate, albeit briefly.

In 2003, another androgynous person, Alex MacFarlane, was issued with an Australian passport identifying the holder as neither male nor female but as X.

Such instances are rare anywhere in the world. A couple of countries, notably India, have in recent years begun to offer a non-gender-specific option on passport applications, while Nepal has reportedly issued at least one non-gender-specific identity card to a citizen…