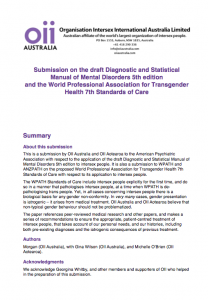 OII Australia, together with OII Aotearoa/NZ, today released a submission [PDF] to the American Psychiatric Association (APA), regarding the draft Diagnostic and Statistical Manual of Mental Disorders, 5th edition.

Intersex people may have the biological attributes of both sexes or lack some of the biological attributes considered necessary to be defined as one or the other sex. Intersex is always congenital and can originate from genetic, chromosomal or hormonal variations. Many intersex people, when their status is discovered at birth, are arbitrarily assigned a gender, and this may be surgically reinforced.

“We consider that the APA pathologises natural, understandable responses to life experiences. Our submission contains a wide ranging review of medical and personal evidence, and there is significant evidence and support for our position.”

For example, the British Psychological Society submission on the DSM draft states:

“we are concerned that clients and the general public are negatively affected by the continued and continuous medicalisation of their natural and normal responses to their experiences; responses which undoubtedly have distressing consequences which demand helping responses, but which do not reflect illnesses so much as normal individual variation.
“We believe that classifying these problems as ‘illnesses’ misses the relational context of problems and the undeniable social causation of many such problems.” *

“We regard the proposed classification of “gender dysphoria” as problematic in the way it relates to intersex people who reject an arbitrarily assigned gender. We also reject pathologising language that defines intersex variations as ‘disorders of sex development’.
“We regard “gender dysphoria” to be a form of minority stress, a result of problematizing gender variance.”

The submission is also being presented to the World Professional Association for Transgender Health 7th Standards of Care, which addresses intersex people for the first time. We regard this as mission creep which has taken place without consultation with intersex representative bodies.

“The issues some intersex people may have in dealing with earlier gender assignments they are uncomfortable with are not to be conflated with transgender health issues. All standards of care for intersex people, whether they have gender assignment issues or not, should be developed in full consultation with intersex individuals themselves, and organisations that represent them, just as has been the case with standards of care for transgender people.”

The submission makes a series of recommendations to ensure the appropriate, patient-centred treatment of intersex people that takes account of our personal needs, and our histories, including both pre-existing diagnoses and the “iatrogenic” consequences of previous treatment.

Senator Louise Pratt, Senator for Western Australia, has generously commented in a letter of support in the submission:

As this submission from OII asserts, in order to properly address health and human rights issues for people who are intersex it is vital to recognise that there is a natural, biological basis for any gender non-conformity. It is a submission informed by sound research as well as the experiences of intersex people.

We thank Senator Louise Pratt, and the members and supporters of OII, and other contributors, who helped us to prepare this major submission.

OII Australia and OII Aotearoa/NZ are national bodies by- and for- intersex people. The mission of OII Australia is: