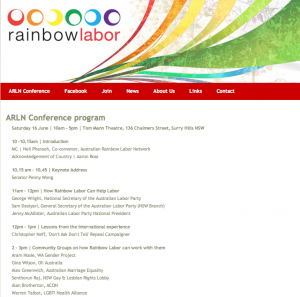 Gina Wilson, president of OII Australia, shared a platform on “Community Groups on how Rainbow Labor can work with them” at the Rainbow Labor conference with Senthorun Raj from NSW Gay and Lesbian Rights Lobby and Amnesty International, NSW, Aram Hosie from the WA Gender Project and Inspire Foundation and WA Gender Project, and Alex Greenwich from Australian Marriage Equality last weekend.

Rainbow Labor, like many organisations who have previously been LGBT and are now LGBTI, has needed time to understand intersex, our differences and our desire for equality.

The conference presented a golden opportunity to engage with an organisation willing to be inclusive and helpful, but reluctant to go where they lacked knowledge. Engagement with OII Australia meant that the conference was fully inclusive of intersex and gave considerable thought to our issues.

Gina was greatly heartened by proposed changes to Labor platform that would see effective inclusion of intersex needs. There was a clear understanding that sexual orientation and gender diversity did not guarantee intersex inclusion, that our anatomical differences are the reason we are often the subject of homophobic discrimination. Because the issue is our sex anatomy, it was understood that this problem was one of sex discrimination rather one of gender identity. This was accepted and will be incorporated into further proposals for changes to the Labor platform.

We acknowledge the good work the ALP has put into intersex inclusion and rights, and thank those in the party who listened to the voices of intersex people when considering their policy positions. We particularly acknowledge the convenors of Rainbow Labor, Senator Louise Pratt, the Hon. Penny Sharp, and the incredibly knowledgeable Jamie Gardiner.

We hope that other parties might pursue this in a non partisan way: acknowledging the rights of marginalised people should not be a matter of sectarian debate. We would be immensely pleased to be consulted on intersex issues by other Australian political parties, and we’d be happy to speak at any party events.

Below are some key points from Labor policy positions on LGBTI. Where intersex is included in policy, real inclusion is a requisite at implementation level: