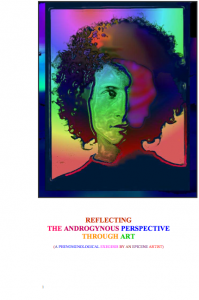 Submitted in 2003, Chris’s work was considered ground breaking at the time. Chris says:

The thesis is the presentation of my life experiences in narrative form and through my own photographic artworks – It is a comprehensive impression of the journey of an intersexed artist who lives in an unforgiving world. Because the photographs often display the naked body, there is a danger of them being construed as pornographic, or at least as merely a commercial enterprise because of photography’s easy reproducibility. My photographic artwork however is done as a pure art form and endeavours to reveal a part of the human experience that has had very little acknowledgment in society except through mythology and the rare specialist academic texts. It provides the reader with the chance to see the giant panorama of the intersexed person, hitherto mostly unseen and of which most has been kept from the public gaze inclusive of the affected individuals whose existence for the large part of human history has been and still is locked in secrecy.

There has been little attempt by societies to understand the human who resides within the framework of a different gendered or sexed person, resulting in alienation of the individual and the total annihilation of their existence as a worthwhile person. The artworks thus become a defiant reassertion of the humanity of the intersex person. They alert the world to the importance of recognizing that there are other human beings who happen to populate the world and the importance of inclusivity within the greater family who make up the sum total of humanity across nations. This thesis has attempted to give the reader and the viewer of the art works a look into a part of that world which has until recently been contained in a conspiracy of silence or ridicule and in so doing demonstrates the role that (the) artworks, (and) especially photographic artworks, can play in the revisiting of realities while breaking down the debilitating taboos that surround people who are in the lived experience of difference, in this case who are genetically, psychologically and physically different and who are androgynous, epicene or intersexed.

This is both an Australia and International world first, as was flying the flags in Antarctica a powerful symbolic gesture, as was the Fellowship and also the way in which my Research Degree Certificate is addressed with my karyotype emblazoned on it! I trust you will find the research degree both stimulating and an inspirational read as also the academic report that follows it in their respective differences

Important note: Unfortunately, the repository at University of Western Australia, is not compatible with all W3C standards-compliant browsers. It is known that Chris’s thesis can be downloaded using Firefox and Chrome on Mac.