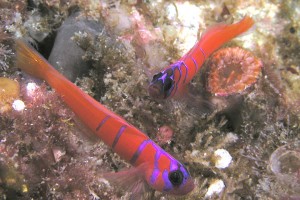 Sociologist and intersex person Cary Costello has just published a great blog post at the Intersex Roadshow on how educational and scientific texts about a hermaphrodite fish are affected by the world view and beliefs of the writer.

A central issue that makes life hard for intersex people is invisibility. Most people are unaware of how common intersex individuals are, something I’ve often discussed on this blog. But there’s a larger setting in which the fact that sex is a spectrum gets erased, and that’s in descriptions of biology and the animal kingdom as a whole. One way this happens is when biology textbooks fail to mention the fact that instances of intersexuality are found in all animals. Another way it happens is through what we’re taught about those species in which hermaphroditism is the norm. It’s the latter that I want to illustrate for you today, by examining about how we talk about a fish, the bluebanded goby.

Cary describes how the fish is variously described as masculine and dominant, feminine and submissive, transgendered, freakish or normal. For example:

Not only do educational sites teach that bluebanded gobies are almost always “normal males and females” rather than always hermaphrodites, the way they present goby “sex changes” reflects ideas about human gender roles. The BBC Science and Nature website states that bluebanded gobies “live in small groups with a single male and multiple females. If the male leaves or dies, the largest female changes sex.”