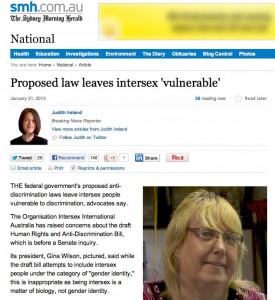 The Fairfax press has published a great interview with Gina Wilson, president of OII Australia, in the lead up to hearings on the Human Rights and Anti-Discrimination Bill on Thursday this week.

Gina makes the point that intersex is a matter of biology, not identity or sexual orientation:

Its president, Gina Wilson, pictured, said while the draft bill attempts to include intersex people under the category of ”gender identity,” this is inappropriate as being intersex is a matter of biology, not gender identity. Intersex includes a range of chromosomal, other genetic and endocrine differences.

“[Intersex] is not a sexual orientation, it’s actual physical differences,” Ms Wilson said.
She said it was ”vitally important” that ”intersex” was listed separately as a protected attribute, noting that previous attempts to bring discrimination cases under state laws – which have similar wording to the proposed federal legislation – had been rejected because the issues were not about gender identity…

In its submission to the inquiry, OII Australia cites workplace harassment, losing work contracts, having problems booking airfares online and being pressured to have medical treatments (such as testosterone therapy), as examples of discrimination experienced by its members.

We’d like to thank Judith Ireland and Fairfax for their excellent coverage.