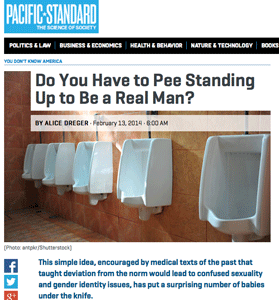 Alice Dreger, professor of clinical medical humanities and bioethics at the Northwestern University, USA, writes on hypospadias in Pacific Standard, The Science of Society: the simple idea that a real man has to pee standing up “has put a surprising number of babies under the knife”.

In 1995, the Journal of Urology published a stunning—and generally ignored—study out of Germany that showed that urologists have unreasonably strict expectations for penises. These physicians looked at a group of 500 men and found that only 55 percent could be labeled “normal,” according to medical standards. Of the 500, fully 225 counted as having hypospadias.

The team observed that “it remains unclear whether the tip of the glans [penis] is truly the normal site” for the urethral opening. The physicians also questioned whether surgical “correction” of hypospadias was necessary, given what they admitted was the “significant complication rate” of “reparative” surgeries—and given these men seemed to have figured out how to use their penises to their own satisfaction.

Only 6 of the 225 men with hypospadias were aware of any anomaly.

Dreger notes that the risks of “hypospadias repair” can be severe, including fistulas (abcess-like wounds), scar tissue build up, chromic pain and infections.

She also comments that there is starting to be less pressure to intervene and promote “corrective” surgeries, “especially in relatively minor cases, because of the risks”. Improved attitudes towards other sexual minorities have helped:

Could it be that surgeons and parents have really worried that a child left to grow up with atypical genitals will be at greater risk of gender identity and sexual orientation “problems”? Well, when I was editing a handbook for parents of these children in 2005, and I asked specialist clinicians what questions parents typically had when faced with a newborn with atypical genitals, the number one question was: Will my child be gay?

After working in this field for almost 20 years, I do not believe that most parents (or physicians) are trying to eliminate the possibility of a gay child through “corrective” surgery. I don’t see this as a eugenicist agenda. I think when parents ask Will my child be gay?, most of the time they are asking something more complicated, something genuinely compassionate: Will my child be able to know love, as I have known love?

There are better options than surgery, including non-surgical devices to help a boy stand to pee. And we can change the norm: agreeing that it is ok to sit to pee.