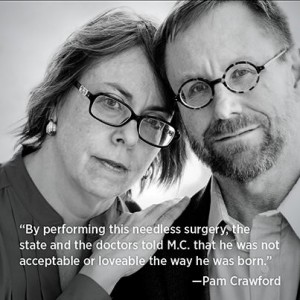 Advocates for Informed Choice, the Southern Poverty Law Center, pro bono lawyers and parents Pam and Mark Crawford have filed “the first ever impact litigation lawsuit” against the state of South Carolina Department of Social Services, the Greenville Hospital System, Medical University of South Carolina and individual employees for, AIC state, “performing an irreversible and medically unnecessary surgery on an infant who was in the state’s care at the time of the surgery”.

M.C. was born with an intersex variation known as ovotestis. The future gender identity of all intersex people cannot be predicted with accuracy, and between 8 and 40% of intersex people have issues with their sex classification, depending upon the diagnosis.

In M.C.’s condition, there is no way to tell whether the child will ultimately identify as a boy or a girl. Instead, the doctors decided to assign M.C. female and change his body to fit their stereotype of how a girl should look.

Despite not knowing whether M.C. would grow up to be a man or woman, or whether he would elect to have any surgery at all, the defendants performed sex-assignment surgery on a 16-month-old child, removing his healthy phallus in an attempt to make M.C. a girl. M.C. has shown signs of developing a male gender and now, at age 8, has clearly identified himself as a boy.

No one advocated for M.C.’s rights when this decision was made at a time when the state was entrusted with his safety and well-being.

The casework has taken over two years to get to this point.

The lawsuit, filed in both state and federal courts, describes the surgery as a violation of the Constitution. The Southern Poverty Law Center say:

The lawsuit describes how the defendants violated M.C.’s substantive and procedural due process rights, outlined in the 14th Amendment, by subjecting M.C. to the unnecessary surgery “without notice or a hearing to determine whether the procedure was in M.C.’s best interest.”

It also charges that the doctors committed medical malpractice by failing to obtain adequate informed consent before proceeding. The defendants told M.C.’s guardians to allow the sex assignment surgery but did not provide information regarding the surgery’s catastrophic risks… Most important, they did not tell them that the procedure was medically unnecessary.

The risks associated with infant genital surgery as serious, and not limited to a choice of the wrong sex and associated psychological harm, but also include damage to sexual function, sterility, and a need for multiple corrective surgeries as his body grows and matures, and lifelong medical treatment.

This case will examine the risks associated with surgery, and it has already brought the fact of continuing infant genital surgery on intersex infants to public attention.

The lawsuit is the first of its kind in the United States, and one of only a few globally. In Germany, Christiane Völling won a similar case a few years ago, and there has been a similar case in Colombia.

Listen to the parents talk about the legal case on Youtube:

“By performing this needless surgery, the state and the doctors told M.C. that he was not acceptable or loveable the way he was born,” said Pam Crawford, M.C.’s adoptive mother. “They disfigured him because they could not accept him for who he was – not because he needed any surgery. M.C. is a charming, enchanting and resilient kid. We will not stop until we get justice for our son.”

Importantly, the aim of the case is to prevent other intersex children from being forced to endure sex assignment surgery without their own consent. We hope that the case will have a broad impact. Infant surgeries have been acknowledged as having no sound evidential basis for many years, with doctors admitting as such to commissions of inquiry in the US since at least 2005 and the San Francisco Human Rights Investigation into the Medical “Normalization” of Intersex People.

There are several unique characteristics of this case that hopefully increase the likelihood of success – including M.C.’s status as a ward of the state at the time of surgery and the limited time elapsed since surgery. We wish the Crawfords, AIC, the SPLC and the legal team in this case all the very best. We’ll be keeping a close eye on the action, and we hope that the impact of bringing this case will be felt also here in Australia.

We are advised that similar cases would be exceptionally difficult to prove in Australia, given that surgery is defined as therapeutic, and is even recognised by the Australian Human Rights Commission.

Find out more about what we are doing in Australia by reading submissions and transcripts for the Senate Inquiry on Sterilisation. The inquiry began in late 2012 and a concluding report is due on 19 June.

This submission by OII Australia details a Family Court case, referenced this year by the Chief Justice of the Family Court, relating to a child with much the same personal circumstances as M.C.