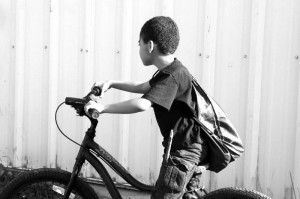 M.C. had been identified male at birth, but his genitals were sufficiently indeterminate that surgeons removed his ambiguous phallus, a testis, and testicular tissue on one gonad, and surgically created an ostensible approximation of female genitals. The suit asserts that there was no medical need for this surgery, which was meant to permanently “fix” this child and turn him into an unequivocal girl, but it did him more harm than good. M.C., now eight years old, feels more like a boy, lives as a boy, and heartbreakingly has asked his mother, “When will I get my penis?”

Hida Viloria, global chair of OII, comments to the BBC World Service (audio) that doctors have known for years that non-consensual cosmetic surgery on infants has devastating consequences – even when the child’s developing gender identity conforms to the surgical outcome.

Professor and bioethicist Alice Dreger, writing in The Atlantic, concurs:

M.C. should certainly be supported in his self-identification as a boy, but one would hope that the courts might understand his rights to have been violated even if he had grown to be a girl…

Many intersex women who had their clitorises surgically shortened in infancy are legitimately angry about having had tissue (and thus sensation) taken from them.

…Doctors have believed for many years, based on little to no evidence (and in some cases, faked evidence), that children require male-typical or female-typical genitals, matched to their gender assignments, in order to grow up psychologically healthy.

Professor Lizzie Reis reflects on the history of these “therapeutic” protocols:

Many of the news sources surrounding the recent case of M.C. have reported that damaging surgeries such as these have been happening since the 1950s. While it is true that during the 1950s infant surgeries became standard protocol, interventionist surgeries to “repair” ambiguous genitals and to change people into the supposed “correct” gender began long before the 1950s… Throughout American history, fears of homosexuality have motivated intersex surgeries, as some physicians wanted to make sure that patients were certain of their sex so that they wouldn’t be attracted to the “wrong” sex.

This is true not only in the United States – and this case marks the moment when understanding of these issues spreads to the mainstream media. Not all the coverage has been accurate, in part due to a misunderstanding about M.C.’s original genitalia that seems to have arisen in a Reuters report. It’s not necessary to dwell on this, but it is important to point out that possession of ‘both’ male and female genitalia is not physiologically possible in mammals. Alice Dreger comments:

contrary to some news reports and commentaries, M.C. was not born “with both sets of genitals,” male and female… The clitoris and the penis are homologues – they are the same organ developmentally – so you get one or the other, or one in-between organ. Similarly, the labia majora and the scrotum are homologues – so you get either a set of labia majora, a scrotum, or something in between. But you can’t have all the female parts (clitoris, labia majora, etc.) and all the male parts (penis, scrotum, etc.) on one person…

What people mean when they say a person “was born with both sets of genitals” is that a child may be born with a phallus that looks a lot like a penis plus a vagina (the tubular organ that goes from the outside of the body towards the uterus, if there is a uterus).

Nevertheless, most press coverage is clear on the issues. From the Washington Times:

For one thing, [this case] brings attention to a condition that gets very little attention aside from the sensationalism surrounding the occasional celebrity rumors or the misunderstanding of intersex athletes like South African Olympic runner Caster Semenya…

Moreover, this case questions who gets to decide what kind of procedures can be performed on intersex children before they are old enough to consent to a life-altering procedure that is not medically necessary… this case differentiates between a life-saving or medically necessary procedure and one that is cosmetic and could have catastrophic physical, psychological and emotional implications for the individual in the future.

The Washington Times quoted Claudia Astorino of OII-USA, who talks eloquently about the M.C. case and broader media coverage of intersex, at Autostraddle:

This case is important for a lot of reasons. First off, it’s always a big deal when intersex is mentioned in the news at all in a way that doesn’t stigmatize, fetishize, or sensationalize intersex. There are a lot of great articles and TV specials that have focused on intersex over the years, but when intersex is covered on the small screen or in column inches, it’s oftentimes handled in a less-than-sensitive way that belies a misunderstanding of what intersex is in the first place…

These are not storylines that serve to accurately define what intersex is, discuss why intersex is such a highly-charged issue, and help people to understand that we’re neither unrelatable weirdos, nor objects of fascination whose bodies and identities are available for public consumption. We’re just people, who happen to be intersex. There are a lot of messed-up things that are happening to us right now, but we are just people…

This case is also important because it illustrates a radical shift in perspective about who gets to consent to what is done to intersex bodies. Doctors and parents have traditionally made decisions as to whether surgery and other medical procedures should be performed on intersex children. In part, this is because we conceive of intersex as a medical problem. There are actual health problems that are associated with some forms of intersex [but] this doesn’t mean that intersex in and of itself is a medical problem.

Many commentators, including Alice Dreger and Claudia Astorino comment on the intentions behind the surgery – but as Hida Viloria said, the problems associated with infant cosmetic genital surgeries have been understood for many years. Claudia Astorino again:

Of all the things that Karkazis has said in Fixing Sex, one statement has resonated with me over the years: “good intentions don’t result in good decisions.” I sincerely believe that many doctors and parents have felt that they were making the best decisions for their child, in trying to normalize their bodies. M.C.’s legal case is one of the first times that institutional authority is being held accountable for their actions – and not given a free pass based on their intentions.

I am really looking forward to seeing the progression of this case in court. There have been some other important legal advances in the past year – an amendment currently under review in Australia offering protections not just on the basis of sexual orientation and gender identity but also intersex status, and an official statement released by the UN in February 2013 condemning normalizing, cosmetic procedures performed on intersex children. I think that with the current trajectory of awareness and legal action, we might just see the end of non-consensual intersex procedures within our lifetimes.

Things are looking up.

The Australian Senate‘s Community Affairs Reference Committee is currently holding an inquiry into involuntary or coerced sterilisation of people with disabilities, and of intersex people.

One Family Court case detailed in an OII Australia submission regards a child who was subjected to a “therapeutic” clitorectomy before later sterilisation on male reassignment.