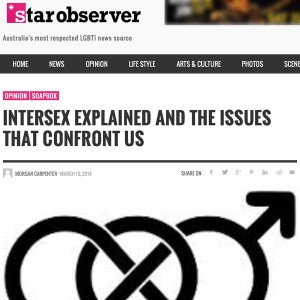 OII Australia president Morgan Carpenter has been kindly published by the Star Observer with an introduction to intersex, and an explanation of health, human rights and identity issues:

…the ACT Government is considering the introduction of a third “intersex” category on birth certificates, and the High Court is due to rule on the case of a trans person with “non-specific” gender, who really wants to be declared intersex. And so identity issues are newsworthy, and even posed as the solution to hitherto unreported medical protocols.

In Australia, adults — intersex or trans — can choose to identify as ‘X’ on passports and in other dealings with federal government. Availability has pretty much matched demand since 2011, when the Gillard Government improved access, and the passport is perfectly usable for travel to Europe, if not the US or Middle East. It is really important for some intersex people, and it also appeals to many trans folk. But it is wrong to assume that all intersex people would choose an ‘X’.

The gender identities and the intersex status of intersex people who superficially appear female or male, or who identify their gender as female or male, are constantly questioned and treated as suspect. Many’s the press report titled “man discovers he’s really a woman”, and many’s the overheard comment saying “she’s not really a woman”. Regarding intersex as a third sex exacerbates this problem, treating all intersex male or female identities as suspect.

We welcome recognition that sex is more than just male or female — and some of us need it — but we don’t want to see a third sex imposed on intersex people without consent. We don’t welcome simplistic claims that a third classification will improve lives for third-gendered people, any more than two classifications improve the lives of women.

Read the full story at the Star Observer.