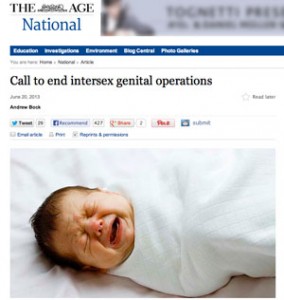 The Age newspaper printed two articles on intersex by journalist Andrew Bock on Thursday this week: It takes more than two and Call to end intersex genital operations.

The news article contains a call by OII Australia and the AIS Support Group Australia to end appearance-related genital surgeries on intersex infants. This reflects our call in submissions to the current Senate Inquiry on involuntary and coerced sterilisation.

We hope that friends, supporters and allies will join us in this call, and make support known to the senators engaged in the Inquiry, and to MPs and other decision makers. Health is also a state, as well as a Commonwealth, matter.

Andrew Bock had unprecedented access to intersex people through the course of the articles’ research, as well as access to current and former staff at the Royal Children’s Hospital, Melbourne. We thank Andrew for the opportunity to put information on intersex into the public eye.

Some of the content in the feature article is a matter of concern. 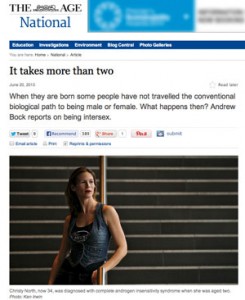 The print and original online article misstated Tony’s gender in the same paragraph as a comment saying Tony prefers no pronouns. Mani’s organisation is misnamed.

Even more significantly, readers come away with the notion that surgeries have improved to the point of being non-controversial when we have no data to support that, and plenty that contradicts this statement.

Associate Professor Sonia Grover, director of the department of gynaecology at the Royal Children’s Hospital, says studies show girls with CAH would identify as females and want to have periods and sex later in life and that surgery done early produced good results. All infant surgery is conducted with the informed consent of parents.

“While we have the data to say they are going to end up identifying as females … and we have evidence that surgical outcomes are good, and sensory outcomes and sexual function are good, where’s the pressure to change the practice?” Grover says.

We dispute these statements, and have the medical data to support our analysis. We know of numerous cases of “girls with CAH” (46,XX and 45,XO CAH) where childhood assignment as female is/would be wrong. There is medical evidence that assignments are wrong in at least 8% of cases. We have evidence from RCH and elsewhere that patient outcomes are poor. Evidence is provided in our submissions to the Senate Inquiry on sterilisation.

The press coverage states that gonadectomies (sterilisation) are no longer carried out on people with Complete AIS (CAIS). This is the first time that we have heard this statement. According to Andrew Bock, Professor Grover claims no such surgeries have taken place in the last 10 years. However, the official policy of the Royal Children’s Hospital stated, just 4 years ago in 2009, that all 46,XY ‘DSD’ intra-abdominal gonads are removed – by definition this includes women with CAIS.

We note that the only support given for infant surgeries by a member of an intersex support group was by a parent:

To our minds, such statements show what we are up against in our campaign for bodily autonomy.

Finally, going public about one’s intersex status is a hugely demanding step and we warmly thank all the people who contributed to Andrew Bock’s research, whether or not they were quoted in the final articles. We also thank Andrew for his attempts to properly represent the needs and concerns of intersex people.

Articles by The Age

Download the Inquiry reports on involuntary or coerced sterilisation