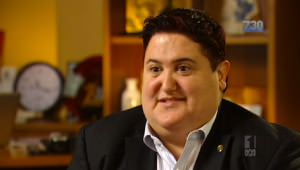 I am a combination of male and female. That is the way that nature made me. And there’s nothing wrong with that.

OII Australia and AISSGA board member Tony Briffa appeared in a segment on intersex, trans and gender diverse people tonight on ABC’s 7.30 current affairs programme and a matching news article.

Tony did a brilliant job at explaining some of the issues that intersex people face, and raised both the non-consensual medicalisation of intersex people and marriage equality as outstanding issues for our community.

Monique Schafter: Councillor Tony Briffa, former Mayor of Hobsons Bay, Victoria, was born intersex. Doctors made the decision the family should raise the baby as a girl and surgically removed Tony’s male attributes. Tony lived as a woman for 30 years…

Tony Briffa: Intersex people have larger issues such as the medicalisation that we receive as children in terms of the surgeries, the non-consensual surgeries that are irreversible. And in things like marriage – you know, when John Howard changed the Marriage Act to specify that marriage was between a man and a woman, what the hell does that mean for someone like me?

The segment is available here, along with a transcript.

We thank Tony for speaking on intersex, and ABC’s Monique Schafter, for her help in telling our story.