We welcome the Health Minister’s announcement today that Medicare will be gender and sex neutral. For intersex people, the fact that our bodies do not conform to sex norms means that the healthcare issues we face sometimes do not conform to the way medical services and procedures have been defined, and made available, by Medicare. 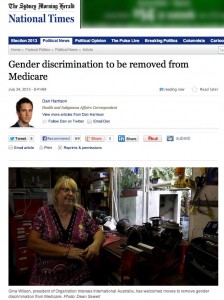 For example, a woman with Complete Androgen Insensitivity Syndrome (CAIS) will have XY sex chromosomes and testes, but her body will develop from conception mostly along typically female lines. A man with 46,XX CAH may have a uterus and ovaries. A 46,XY or 47,XXY man may have breasts and other differences.

Up until now, intersex people have sometimes experienced difficulty in obtaining medical services that effectively meet the needs of our bodies. OII Australia gave evidence on this during the Senate Inquiry on the Human Rights and Anti-Discrimination Bill [PDF].

This new development is crucially important because it means that medical procedures can reflect our actual needs, rather than those that are presumed by our legal gender. It removes anxiety and will lead to better health outcomes.

This development also, of course, benefits trans people whose bodies may differ from their legal gender due to medical treatment.

From the Sydney Morning Herald:

Of almost 6000 services covered by Medicare, 43 needed to be changed. Of these, 15 were changed earlier this month, while changes to the remaining services, and to systems and claims processes, will be made by the end of the year.

“At the moment, there are some Medicare services described as being for a man or a woman. This has caused discrimination against gender diverse Australians who have had to have unnecessary discussions about their gender identity in order to get access to a Medicare service, or to claim a rebate for one at a Medicare office… These changes will also make a big difference to intersex Australians…

“For example, someone who has a uterus may actually identify their gender as male. Under current arrangements, some Medicare covered medical procedures involving the uterus are described as ‘female’ or for ‘women’. These changes bring Medicare into line with the Government’s new Guidelines on the Recognition of Sex and Gender.

The analysis leading to this announcement has been thorough, and we strongly welcome this important move forward.

For information, we acknowledge that the current changes do not apply to the Pharmaceutical Benefits Scheme (PBS).

For example, the gonads of a woman with CAIS naturally produce testosterone. The nature of her intersex variation means that a woman with CAIS metabolises testosterone in an atypical way, developing mostly along typical female lines. Gonadectomy has been a standard protocol for such women, who have been automatically given oestrogen afterwards. Even so, women with CAIS do describe a benefit from taking a hormone identical to that which their bodies naturally produced – but testosterone is not available via the Pharmaceutical Benefits Scheme because they are women. Medical research is in progress [German language link] but supports this case. There is also doubt about the availability of PBS testosterone to people with an X gender identifier.