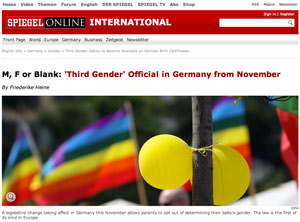 Over recent days, there have been a number of articles stating that the German federal government is proposing a “third gender” or blank sex designation on birth certificates for intersex people. As with recent federal Australian identity guidelines, the German proposals have generated enormous interest.

The option of selecting “blank”, in addition to the standard choices of “male” or female” on birth certificates will become available in Germany from November 1. The legislative change allows parents to opt out of determining their baby’s gender, thereby allowing those born with characteristics of both sexes to choose whether to become male or female in later life. Under the new law, individuals can also opt to remain outside the gender binary altogether.

The Huffington Post and The Guardian have also reported on the move.

In common with the position of OII Australia, which we’ve recently expressed to the ACT government, all the major intersex organisations in Germany oppose the proposals. Moreover, we regret the shift in focus from issues around bodily autonomy and the ending of non-consensual surgical intervention onto identity issues.

In February, our German sibling organisation expressed deep concerns about the mandatory nature of the proposals – it is an ‘option’ in the sense that ‘male’ and ‘female’ are options:

Instead of leaving sex registration open for all, and not just intersex children, once again special rules are created, which produce exclusions. The living conditions of the vast majority of intersex people will not improve as a result.

What we need is an end to the externally determined gender assignment, the practice of sexed standardization and mutilation, as well as medical authority of definition on sex.

OII Francophonie point out (translation here via Google) that:

This law rather states that children seen by doctors as not properly “boys” or “girls” can not be classified as such in the register of births. It is therefore not a creation of a third gender in civil status but, in practice, a way of pushing some people “off sex”. It is the sole judgment of physicians who retain their authority on gender assignment…

For France, a sex determination must be made within a period of two years. In fact, this lack of sexual status of the child has not led to an abandonment or release from mutilating practices…

Today, Zwischengeschlecht has pointed out similar conclusions made public in February by their organisation and by Intersexuelle Menschen. Zwischengeschlecht characteristically describe media perceptions of the proposals as “silly season fantasies”:

We ask: When will Intersex Genital Mutilations finally cease to be ‘overlooked’ – and articles about intersex finally give persons concerned and their organisations a say, too?

Unfortunately, as with the Australian guidelines on recognition of sex and gender, the press coverage conflates sex and gender, trans and intersex, and focuses on identity politics rather than the more fundamental issues of bodily autonomy that remain the core concerns of all intersex organisations, and the demands of the Second International Intersex Forum in December 2012.

Jane Fae writing in The Guardian yesterday identifies trans concerns with the legislation – but displays no awareness of the concerns of intersex organisations:

I have three issues with the German proposal. First, its reliance on physical characteristics. As above: you can’t tell just by looking. Second, it omits an entire world of non-binary: those who do not identify as either gender, irrespective of supposed defining physiognomy. The clearly intersex will now receive a helping hand. But a very large community of individuals who do not adhere to one binary gender or the other have been left behind. Again. Finally, why do we continually return to gender as something of defining importance in our lives?

The Guardian and other media organisations have access to intersex people willing to make statements on the proposed legislation; we would welcome the opportunity to make our own voice heard.

We recommend that the following issues be reflected upon:

We accept and encourage proposals to allow adults to choose a “not specified”, blank or multiple sex classification. We oppose such a classification for infants and children.

In this context, to paraphrase Mauro Cabral, paraphrasing OII Australia president Gina Wilson: adding sex designations is like adding bullets to a Kalashnikov.

An opinion piece on birth certificates was published overnight in Der Spiegel on 22 August. OII Australia secretary Morgan Carpenter was a co-author, along with Silvan Agius (ILGA Europe) and Dan Ghattas (OII Germany).