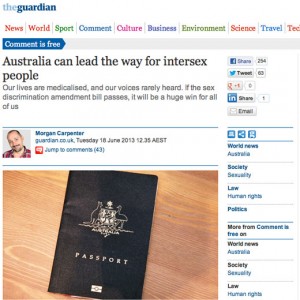 On 18 June 2013, The Guardian newspaper published an article by OII Australia president Morgan Carpenter on recent progress for intersex people in Australia.

The article presents information on the progress towards our inclusion in anti-discrimination legislation, plus the new federal sex and gender recognition guidelines – and also our attempts to raise vital issues about bodily integrity and autonomy.

Morgan would like to thank The Guardian for commissioning and accepting the article, and for helping us to make our voice heard more widely.

The article has recently also been published in Dutch by NNID, and here’s the full text in English.

Australia can lead the way for intersex people

This has been possible as part of a government commitment to lesbian, gay, bisexual, transgender and intersex (LGBTI) inclusion, even while public awareness of intersex remains sketchy.

You see, our lives are medicalised, and our voices rarely heard. This limited understanding was recently exemplified by a press agency report published globally this month: “Hong Kong man, 66, finds he’s a woman“. His surprise late discovery made him a news story and a freak show. The man had a swollen abdomen and was found to have an ovarian cyst, congenital adrenal hyperplasia – “which gave her the appearance of a man” – and Turners syndrome (no full second sex chromosome), “making him by definition a woman”.

In actuality, he is an intersex man. His rare combination of diagnoses made him an “intriguing” case. Most medical research on or affecting intersex lies in medical case studies. As bioethics professor Alice Dreger has pointed out, some of it is even faked.

Doctors say he decided to continue “perceiving himself as having a male gender” (of course), even while scores of press reports state he’s really a woman. Doubts caused by his intersex status outweigh a manhood based on birth assignment, identity documents, rearing, socialisation, beard, penis and self-identification.

Intersex people have queer bodies. We disprove a binary worldview. Some of us also have queer identities, reflecting our embodiment. This is why intersex is a separate attribute in the sex discrimination amendment. It’s not a matter of sexual orientation or gender identity – we have just as diverse sexualities and gender identities as everyone else. It’s not even, as the Coalition minority report on the sex discrimination amendment suggests, a matter of “sexual identity”. It’s about innate physical sex characteristics, and the homophobic or misogynistic treatment we often have to face.

Back in late 2012, the draft of the human rights and anti-discrimination bill suggested that intersex people were a gender identity, protected from discrimination only when “genuinely” identifying as male or female. That excluded the most obviously different amongst us, the most vulnerable, as well as “non-binary” trans people. The bill currently before the Senate recognises the biological basis of intersex, and protects all of us. The bill itself has cross-party support. If it passes, it will be a world first.

Discrimination impacts our employment prospects, healthcare, education and interpersonal relationships; if passed, the legislation will really help. Alongside it, the new federal sex and gender recognition guidelines respect our diversity. Some intersex adults born in Victoria have had sex non-specific birth certificates for a decade. We’ve had “X” passports for as long, and the current government made access much easier in 2011. Now, that choice is to be rolled out across federal services.

At a time when our first woman prime minister has had to endure unprecedented scrutiny over her own sex and body, the government’s leadership is welcome. It is to be congratulated for consulting, listening, and acting.

But there remain fundamental issues to resolve. Unnecessary cosmetic surgery leading to lifelong medicalisation is still carried out on the genitals of intersex infants to improve their marriageability and prospects. The man in Hong Kong would, if newly born here, be assigned female and undergo “therapeutic” surgeries to appear female, including clitoris reduction. That’s before any clear understanding of his future gender identity, and despite studies showing poor outcomes regardless of identity.

A ground-breaking case was recently filed in the US. We’re watching with interest, but the chief justice of the family court of Australia referred this year to a case of our own, of a child with congenital adrenal hyperplasia. The adolescent, raised a girl and subjected to a clitorectomy in infancy, was suicidal. The case was brought to authorise a change of legal sex to male. The court approved this – and also his sterilisation. There was no medical necessity for the sterilisation, it was to align his body and his legal sex.

A Senate Inquiry on involuntary sterilisation will report next month. We need leadership here, too, and autonomy over our own bodies.