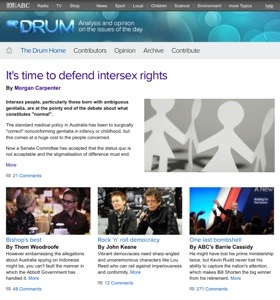 Morgan has an opinion piece on the ABC’s opinion pages, The Drum, this afternoon: “We must put an end to normalising surgery” on intersex infants and children:

The clitoris is the only part of any human body that’s purely designed for pleasure. But is too much of a good thing a bad thing?

Research on what constitutes “normal” genitalia, for both men and women, is somewhat scarce – but labia reductions are becoming more common, and so a Dutch study in 2009 examined what doctors believe a normal labia looks like. It found that plastic surgeons were more likely to find larger labia minora “distasteful and unnatural, compared with general practitioners and gynaecologists”. It also found that male doctors in each of those specialties were more inclined than women doctors to recommend surgery.

The ABC is Australia’s national broadcaster. We thank the ABC team for this opportunity to talk about The Senate committee report on the involuntary or coerced sterilisation of intersex people.