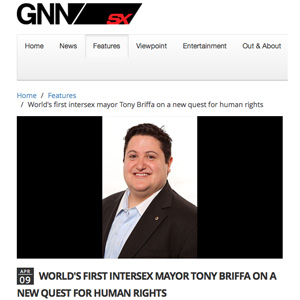 On finding out about Androgen Insensitivity Syndrome and taking testosterone:

At the age of 29, (after she had been in a straight marriage with a man for two years from 19 to 21 and after coming out as a lesbian at 26), Briffa was told the truth about her condition.

It was this discovery that led Briffa to “an experiment”.

In 2000, at the age of 30, Briffa went on 60 Minutes in a bid to convince doctors to give her testosterone – they had previously refused to. Within months of the program going to air doctors relented and Briffa began hormone therapy again, this time taking testosterone. However, as part of this therapy the doctors also tried get Briffa to undergo psychiatric assessment in much the same way a transgender person has to seek psychiatric approval before undergoing hormone therapy.

“They tried to get me to go through the trans process which I completely refused,” Briffa says. “For a start, I’m not trans and they didn’t have my approval for what they did to me previously and so I wasn’t going to jump through hoops for them to give me what my body naturally had.”

In 2014, Briffa has left local government and gone back to being an aviation engineer, which was her career before politics. She is focused on her new role with OII and confident of the changes she can make for intersex people. And Briffa is more content personally than ever before.

“Sometimes people say to me they are confused about whether I am male or female and I say to them, ‘imagine being in my shoes!’

“I’m not going to pretend I have all the answers, it is bloody confusing being born both male and female and having had done what the doctors did to me.

“But I’m lucky. I’ve got a great family, a great community and a great wife and I never thought I’d be lucky enough to have such a wonderful relationship. I really do feel very fortunate.”