The 25th Session of the Human Rights Council in March 2014 witnessed a historic first: the first ever side event exclusively focused on intersex issues, titled Intersex People and Human Rights: Violations, Voices and Visions.

It was preceded, on Monday 10 March, by a speech to the Human Rights Council on behalf of participating NGOs.

The panellists presented both powerful testimonials and analysis, urging States to fulfil their responsibilities to stop human rights abuses directed against intersex persons, including violations of rights to health, dignity, equality, bodily autonomy, and freedom from torture and other cruel, inhuman or degrading treatment. Several State delegates were moved to tears, and indicated afterwards that they understood for the first time that the “I” in LGBTI represented more than just an initial.

Statement about the panel meeting 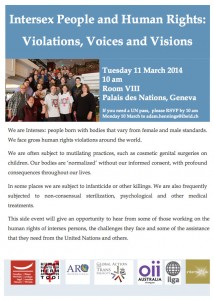 For the first time intersex activists from around the world will hold an event at the United Nations on the particular human rights violations and challenges faced by intersex people. At a side event to the 25th Session of the Human Rights Council, activists from four countries will discuss the genital mutilation, torture, psychological trauma, and discrimination that intersex people face because of our bodily diversity. During this groundbreaking event, presenters will call for concrete action that states and the international community must take to protect this here-to silenced population.

I was born with so called ambiguous genitalia. The doctors couldn’t tell if I was a boy or a girl. At two and a half months they castrated me, they threw my testicles in the garbage bin. When I was seven they cut my genitals to make me look more like a girl. The doctors always lied to me and my parents. I spent my life in fear, pain and shame. I wish I could have grown up without surgery and decided myself.” – Daniela Truffer, Zwischengeschlecht.org

Panelists will also discuss progress that has been made in some countries, urging UN member states and the UN human rights mechanisms to enact similar action to protect human rights for everyone, everywhere. For example, presenters will underscore the urgent need to depathologise variations of physical sex characteristics in medical guidelines, protocols and classifications, like the World Health Organization’s International Classification of Diseases.

Australia has adopted many reforms in the past year, including intersex inclusion in anti-discrimination legislation, and improved access to health care. A major Parliamentary committee report on the involuntary or coerced sterilisation of intersex people remains to be implemented – Morgan Carpenter, OII Australia

This side event will give an opportunity to hear from some people working on the human rights of intersex persons, the challenges we face and some of the assistance needed from the United Nations and others. The side event will be in English.

Panelists include the following intersex activists:

These are historic events, and we thank ILGA, the Canadian HIV/AIDS Legal Network, and ARC International for helping make them possible. OII Australia would also like to thank Travis de Jonk and ACON for great assistance with our video contribution.

Note: this page was updated on 30 May with a re-edited video link; thanks to Morgan Ztardust for video assistance.

Thank you, this was amazing watching and listening.great hearing so many topics covered. You all spoke great and I so would of loved to have been present.

This is really good news. Many years ago I had contacted a senior member of the World Health Organisation (WHO) about Intersex Issues and Concerns and drew a blank, although the given person did listen. I was given an email by a dear friend in the know after a few brief polite exchanges said that: “Whereas you may not wish to support us now, sooner or later I think it is likely you will have to listen whether you like it or not, I say this as the abject cruelty that goes on is untenable and the knowledge base abysmal concerning those so affected…” or words to that affect…

I believe through the United Nations (UN) the WHO will have to start waking up to the reality of the ineptitude, conceit, collusion and deceit can no longer remain an excuse for ignorance nor dismissal of profound matters of Primary Health Care Provision without endangering its own credibility and the lives of those it has sworn to help under the premise “First Do No Harm” and in this case those who are born Intersex.

This is great. There is need for more awareness on these issues in Africa as well