Morgan was interviewed by John Safran and Father Bob on triple j’s Sunday Night Safran last Sunday night. The interview is from 1:04:30 to 1:15:20. 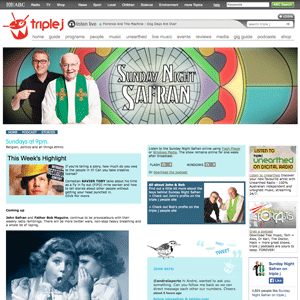 Do you think secrets are made to be kept? Or are they always, ultimately destructive?

+ MEREDITH BURGMANN Political, environmental and social activist recently discovered ASIO had kept a massive, secret file on her for decades.

+ After years as a cult leader, DAVID AYLIFFE eventually decided the secrets and lies were too much and too divisive.

+ And it wasn’t until MORGAN CARPENTER was in his 30s that he discovered his body had a massive secret.

This was a great opportunity. Thanks so much to John Safran, Father Bob and their team for the fantastic chance to be interviewed.