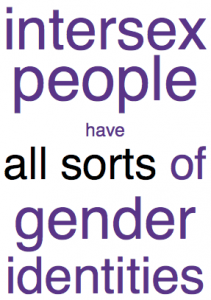 In Australia, and indeed in the rest of the world, intersex is not recognised as a third gender identity but rather a biological state of being, meaning we are born intersex.

Here in Australia, intersex has been in the news quite a lot over the last number of months and the reasons for that had nothing whatsoever to do with those of us who were biologically intersex but, rather, centred on one particular individual, Norrie, who was born biologically male 46 XY and transitioned (underwent female reassignment surgery) to live their life as a female, a role they continued in for a number of years before deciding, they were unable/unwilling or perhaps for publicity reasons, that they could not adapt to living as female, and instead decided through the courts of this land to try and introduce a third gender marker. My understanding is that their preferred term was “Intermediate” or “Intersex”.

After much deliberation and consultations with the appropriate authorities and organizations that represent the interests of people who are born with biological sex differences, the courts decided to acknowledge a third gender marker but that it be known as “Not Specified”, so as to protect those who were born biologically intersex and who did not see their gender as intersex but rather as male or female.

Where to from here? Well to be honest I was initially very impressed with The Australian Klinefelter XXY Support Group’s willingness to understand intersex and what that meant to the XXY community. As a board member of OII Australia, I had liaised with the group where plans were afoot for an intersex Webinar which would serve to introduce the XXY community, and in particular the Australian XXY community, to broad intersex issues and what that entailed from an XXY perspective, going further I arranged for the group’s president to meet with the president of OII Australia (Morgan Carpenter). And then the Norrie case took hold and everyone in the Australian Klinefelter XXY Support Group scurried to distance themselves from intersex and all that it entailed, the evidence of which is very apparent in their recent submission to the Victoria Department of Health.

Now that the dust has settled, I would ask that (AKXSG) take a closer look at OII Australia, at what we’re trying to achieve for the greater good of all people born (and yet to be born) with biological sex differences and together we can better respect the children of today who will one day be the adults of tomorrow. From our submission on genetic selection against intersex traits:

The high frequency of individuals with SCA [Sex chromosome anomalies] is due to the fact that their effects are generally not as severe as autosomal abnormalities and are rarely lethal. Indeed, most cases of SCA are compatible with normal life expectancy and often go undiagnosed. [15]

A 2010 Consensus statement on diagnosis and clinical management of Klinefelter syndrome reports “only 25% of estimated cases are diagnosed post-natally, and <10% are detected at or before birth”.[16] The health impacts of 47,XXY and 45,X0 are typically considered to be cognitive differences, infertility and differences in stature and physical appearance. In some cases there are concurrent health problems.

With this low diagnosis rate, it is likely that the commonly stated health impacts of an extra sex chromosome are overstated. The overwhelming majority of persons with 47,XXY do not come to the attention of clinicians because they do not meet the clinical parameters that indicate a need for karyotype testing.

Despite these low rates of diagnosis, termination rates for 47,XXY once diagnosed during pregnancy are known to reach up to 88%.[16,17] The framing of this diagnosis as a major genetic disorder thus has a dramatic impact on the percentage of pregnancies carried to term. We believe that this impact far outweighs the largely benign consequences of sex chromosome differences.

OII Australia believes that sex chromosome differences such as 47,XXY, 45,X0 and similar variations must not be framed as genetic defects, and should not be de-selected on that basis

CeeCee Cody is a board member of OII Australia.

Thank you CeeCee for a job very well done!

And I wish us all, all the very best for the future.