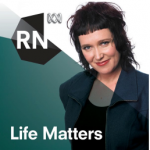 Andrew Solomon A.M. Homes and Robert Hoges spoke recently at Sydney Writers’ Festival on growing up different from parents – something he terms “horizontal identity”, in contrast with (for example) ethnic heritage, and typically religion and nationality which are “vertical identities”, shared between family members. Radio National presented extracts of this talk on Monday 2 June.

While Andrew Solomon didn’t speak about intersex children, he does speak of issues that will be familiar to every intersex person aware of their differences from an early age. From 10 minutes into this Radio National transcript he says:

Real acceptance operates at three levels: there’s self acceptance, there’s family acceptance, and there’s acceptance by the larger society, and each of those levels feeds the others. So someone with good self acceptance will have a family that more readably accepts him but if that family lives in an accepting world, it’s much easier for them to accept their child. And so they all go back and forth. And family is the mediating force between the individual and the society especially for conditions that are manifest early in childhood, when the child’s sense of identity is being formed. It’s the parents who say,

I found that parents in the research that I did ended up being the most radical advocates, I mean, autism parents? there has not been a group like that since the height of the AIDS crisis when there was huge gay activism. You also have parents, when you look at parents of children who are transgender, you have some who are incredibly accepting and it’s fantastic, and you have some who are unbelievably cruelly rejecting, and they refuse to negotiate that relationship between the child and the society.

So I thought that by looking at this constellation of conditions, I could the ways in which families are ultimately the determinants of what people grow up thinking of an illness and what they think of as an identity. I found that people whose parents basically made them feel damaged from an early age mostly still hold the little icicle of that damage in their hearts, even after they’ve gone on to enormous successes. And people who have had the opposite experience go the opposite way.

I had an extraordinary encounter a few years ago with a survivor of the holocaust… he said to me “I was loved as a child”, and I thought it was such a powerful evocation of the way, once you’ve had that sense of worth instilled in you, it stays with you in the most unlikely and implausible of circumstances. And it can be very difficult to win it if you haven’t had that…

One of the lessons of my book was that it takes everyone a little while. Love is there from the beginning, acceptance takes time and dawns only gradually.

Andrew Solomon is an author, activist, and lecturer in psychiatry. He recently had published a book, Far From the Tree, that explores the issues in this talk. 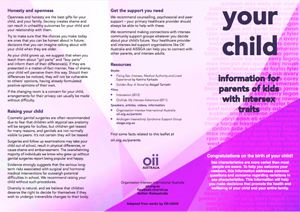 Readers interested in this program may be interested in our resource for new parents. Your beautiful child, a guide for parents, aims to help new parents (and potential parents), to welcome the birth of a child with atypical physical sex characteristics, and find the support and information they need to feel confident about the long term future of their child.