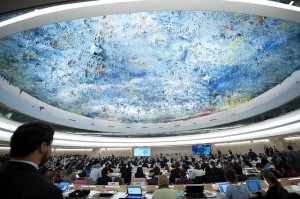 Internationally, work on intersex issues is partially supported by the inclusion of “sexual orientation and gender identity” (SOGI) in a small number of UN resolutions, joint statements, and reports of Special Rapporteurs. UN resolutions establish frameworks for national legislation find their way into national law, as was the case In the last year with the inclusion of “sexual orientation” and “gender identity” along with “intersex status” in the Commonwealth Sex Discrimination Act. Australia is the only country to so far adopt an attribute of “intersex status”, although the Organization of American States has recently created a Human Rights rapporteurship that includes the term “body diversity”.

Earlier this year, Tony Briffa was able to participate in a civil society meeting in Istanbul on engagement with the UN. In March, Morgan Carpenter was able to remotely participate in the first ever side event on intersex issues during a session of the 25th UN Human Rights Council. Earlier this month, we wrote in support of a Swiss Shadow Report on the rights of the child.

Yahia Zaidi (Pan-Africa ILGA) made a joint NGO statement on 10 June commending Navi Pillay, outgoing High Commissioner for Human Rights, for her action on LGBTI and other human rights issues during her term in office:

We commend the High Commissioner for her leadership in solidifying the Office’s commitment in calling for an end to human rights violations against all persons, including those who face violence, discrimination, stigma and abuse because of their sexual orientation, gender identity and expression, or intersex status.

These are urgent and crucial human rights concerns. In all regions, Lesbian, Gay, Bi, Trans and Intersex people face sexual violence, killings, arbitrary detention, criminalisation, forced surgery, involuntary sterilization, genetic de-selection, and denial of basic economic and social rights. This is compounded by multiple and intersecting forms of discrimination, including on the basis of sex, gender, race, class, ability, and religion.

At the same time, we welcome the positive developments on these issues around the world, including the recent adoption by the African Commission on Human and Peoples’ Rights of a historic resolution on the ‘Protection Against Violence and other Human Rights Violations Against Persons on the Basis of their Real or Imputed Sexual Orientation or Gender Identity’, as well as the adoption just last week by the 44th General Assembly of the OAS of its seventh resolution on “Human Rights, Sexual Orientation, and Gender Identity and Expression”.

The Human Rights Council must also play its part. While regional human rights mechanisms move ahead in addressing these issues, the Council risks falling behind. We endorse the High Commissioner’s comments, in receiving last month an award from the international LGBTI NGO ILGA, when she noted: “the Human Rights Council can maintain its attention on this human rights issue by instituting regular reporting at the inter-governmental level.”

We call on the Council to address all forms of violence and discrimination based on sexual orientation, gender identity and expression and intersex status, and to ensure sustained, systematic attention to, and documentation, of both violations and protection gaps. We further call on all States to take such legislative and other steps as are necessary to prevent, investigate and remedy such forms of discrimination and violence.

Finally, we thank the High Commissioner for being a champion of human rights for all, and wish her success in her work and future endeavours. We look forward to working with her successor to continue to address these important human rights issues.

Tony Briffa delivered a joint NGO statement on 17 June about the impact of gender stereotypes on women, during the Human Rights Council’s annual full-day discussion on women’s rights. Here’s the text:

Thank you Mr Vice President for the opportunity to discuss gender stereotyping for lesbian, bisexual, trans, and intersex women.

Stereotyped roles for women have a severe effect on the enjoyment of rights of lesbians, bisexual women, trans women, and intersex women. Stereotypes constitute a form of discrimination when they result in differentiated treatment, implemented through a law, policy, or practice, that nullifies or impairs the enjoyment of human rights or fundamental freedoms.

Many differences in treatment based on sexual orientation, gender identity, or intersex status have their root in stereotypes about gender roles, such as for example that women are better parents than men, that families must consist of a man and a woman with assigned (and stereotyped) gender roles, and that pregnancy predisposes a person to be a better parent.

The reality is that millions of individuals of diverse sexualities, gender identities, and of intersex status already bear primary responsibility for raising children. The belief that they are not as capable as non lesbian, bisexual, trans or intersex women of raising well-balanced, healthy and happy children is a common, and damaging, stereotype—one that is constantly contradicted by studies on the wellbeing of children in same-sex families. In fact, study after study shows that child welfare is closely correlated with parental support and love, not with the parents’ sexual orientation, gender expression, or intersex status.

Stereotypes often have the result of further marginalising the group they ascribe specific traits or behavioral patterns to. For example, the stereotype that trans women or sex workers are vectors of disease, in particular HIV, results in stigma attached to accessing HIV testing and treatment services, which affect everyone.

Stereotypes about women’s appearance, sexual function and sexual orientation also has significant impacts on intersex women. As a result of these stereotypes, many are subjected to surgeries as children to make their genitals appear what doctors believe look feminine and can function for heterosexual sex. These surgeries are conducted without the consent of the girls involved and often include the removal of healthy gonads.

In order to ensure equality for all women – including lesbian, bisexual, trans and intersex women – we must break down old fashioned and outdated stereotypes and heteronormativity. Thank you.

On Wednesday 11 June, ARC International hosted a side event of the Human Rights Council entitled “The Human Rights of LGBTI Persons: Regional Developments, International Responsibilities”. Yahia Zaidi of Mantiqitna and Pan Africa ILGA facilitated a panel discussion involving Richie Maitland of CariFLAGS, Nori Spauwen of COC Netherlands, Clement Voule of International Service for Human Rights (ISHR) and Morgan Carpenter of OII Australia. Speakers discussed progress and challenges at regional levels, and underscored the need for leadership by the Human Rights Council. For Morgan, the event was also an opportunity to educate about intersex issues. Interest in the issues raised was strong.

NGO side event on the criminalisation of sexuality and reproduction

On Thursday 12 June, Morgan raised the exclusion of intersex girls from laws that criminalise Female Genital Mutilation in a side event entitled, “Criminalization of sexuality and reproduction: human rights impact, intersections and strategies“. The event, organised by the Sexual Rights Initiative, Amnesty International, Ipas and UNAIDS was facilitated by Anand Grover, special rapporteur on the right to health. Panelists were Grace Wilentz of Youct, Karolina Wieckiewicz of SRI and the Polish Federation for Women and Family Planning, Irina Maslova of the Sex Workers’ Rights Advocacy Network (Russia), Sunita Kujur of SRI and CREA (India), and Patrick Eba of the UNAIDS.

Morgan’s question drew attention to Australian legislation that prohibits female genital mutilation on cultural grounds, but which permits surgeries on girls with ambiguous genitalia. At the same time Victoria Department of Health guidelines for surgeries on intersex infants and children state rationales that explicitly have a cultural basis, such as “risk of social or cultural disadvantage to the child, for example, reduced opportunities for marriage or intimate relationships“.

Governmental side event on equality in sports 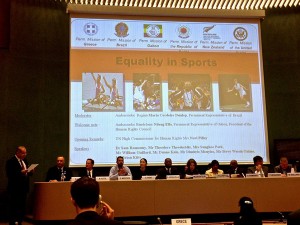 We’re delighted to note that the UN High Commissioner for Human Rights mentioned the discrimination intersex people face in sport at a side event on “Equality in sports” on Monday 16 June.

Tony raised issues with the government panel around intersex people and sport:

As I sat here and listened to all the panel members I heard statements about the importance of sports in culture and to the health of individuals. I heard statements that included “sports has a role to help imbed societal change”, “sports is about equal opportunity for all” and “people should be able to participate in sport no matter of their gender, religion, culture, sexual orientation, race or disability“. I also heard about how inclusive sports now is to the range of human diversity. However, no one other than the High Commissioner mentioned the issues intersex people face when it comes to inclusion in sports. Intersex people face systemic discrimination in sports, and especially by the IOC, just because they were born biologically different.

Intersex women have been outed at Olympics and excluded for decades with questions about their sex. They are women and should be recognised as such. Intersex women should not be required to have their genitals modified to compete in sports, including having surgery to reduce the size of their clitoris to an size more acceptable to the IOC. Their clitoris is not going to give anyone an advantage in sports. Tests involving testosterone levels are ineffective and meaningless for women with Androgen Insensitivity Syndrome.

What can the UN, IOC and member states do to eliminate discrimination in sports on the basis of someone’s intersex status?

NGO side event on LBTI women

I am honored to make this statement on behalf of the international NGO ILGA2 and 13 co-sponsoring NGOs. It is endorsed by over 500 organizations from more than 100 countries: from Australia to Zimbabwe, from St Lucia to Samoa, from Uruguay to Uganda.

For many, these issues are inextricably linked to broader issues of gender equality, autonomy over our bodies and lives, sexual and reproductive health and rights, as well as multiple and intersecting forms of discrimination on the basis of factors such as class, poverty, occupation as sex workers, religion, race, HIV status and disability.

In too many countries, we face severe human right violations – we are criminalized including under colonial-era laws, we face the death penalty, we are murdered, lesbians are subject to rape and forced marriage; intersex peopleface genetic de-selection, infanticide, coerced sterilization and genital mutilation; transgender persons are demeaned and beaten, subjected to pathologisation and sterilization, their identities often unrecognized by States.

We are denied health care or needed treatment; we routinely face discrimination in work, housing and education. In many countries, our work as human rights defenders is opposed, obstructed or banned. Our rights to peacefully gather are often denied, while attempts are made to silence our voices.

There are also positive developments in all regions of the world. We welcome, for example, the recent adoption by the African Commission on Human and Peoples’ Rights of a historic resolution on the “Protection Against Violence and other Human Rights Violations Against Persons on the Basis of their Real or Imputed Sexual Orientation or Gender Identity” and the adoption by the Organization of American States just this month of its resolution on “Human Rights, Sexual Orientation, and Gender Identity and Expression”.

The Human Rights Council must also play its part. These violations are systemic, and require systemic responses. The Council must adopt a resolution to ensure regular reporting, constructive dialogue and sustained, systematic attention to the breadth of human rights violations on these grounds.

As UN Secretary-General Ban Ki-moon stated to the Council at its March 2012 panel: “The Time has Come”.

Morgan was able to speak with Farida Shaheed, the UN Special Rapporteur in the field of Cultural Rights whose remit includes women’s rights and Female Genital Mutilation, and representatives from the World Health Organization, UN Office of the High Commissioner for Human Rights, and many other human rights defenders and partner organisations. Morgan left on Saturday, and Tony arrived on Sunday.

This article will be updated as weeks unfold.

Our physical participation in these events is wholly enabled by ARC International, and ILGA, and we express our deep thanks for their support.