We’re delighted that Morgan Carpenter spoke on intersex health and human rights at the LGBTI Human Rights in the Commonwealth event in Glasgow, Scotland on 18 July, at the kind invitation of the Equality Network and Kaleidoscope Trust.

Much of the Commonwealth however is not a good place to be lesbian, gay, bisexual, transgender or intersex. Of the 53 member countries of the Commonwealth, 42 criminalise their LGB citizens, and trans and intersex rights also vary dramatically. Around the globe LGBTI people are denied basic human rights, equal access to education, employment, housing and healthcare. Some LGBTI people are denied their liberty and in the most extreme cases their lives. 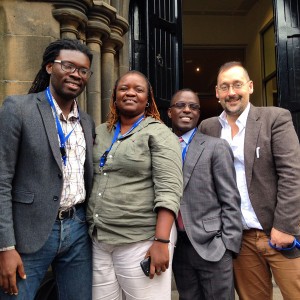 The conference took place on Friday 18 July at Glasgow University, in partnership with Pride Glasgow, the Kaleidoscope Trust and the Glasgow Human Rights Network.

Morgan spoke as part of two panel discussions, and gave a one-hour workshop to a capacity audience. The first panel discussion was chaired by Becky Kent (Scottish Transgender Alliance), and titled “Voices from around the Commonwealth“. The text of that speech by Morgan follows.

Thank you Becky, it’s good to be here, speaking on intersex to an LGBT and I audience. I wouldn’t be here if this was an LGBT conference, and I certainly wouldn’t be speaking. Intersex people are still very much outsiders, and I’m glad that the Equality Alliance is bringing us in.

I’m speaking in a workshop a little later, so I’m going to give a short primer.

The situation for intersex people across the Commonwealth is bleak. We have some major human rights advances in Australia including inclusion of “intersex status” as a biological attribute in anti-discrimination legislation, but there’s much to do, for example, intersex girls remain excluded from policy frameworks preventing Female Genital Mutilation. Elsewhere, we may be subjects of infanticide in Uganda, sex assignment based on parental attitudes towards dowries in Malaysia, and we’re being cleansed from the gene pool in Scotland and the rest of the UK.

Elite athletes may be subjected to humiliation, clitorectomy and sterilisation. An Indian runner, Dutee Chand, found out yesterday in the media that she’s been dropped from the Indian squad for next week’s Commonwealth Games due to higher natural levels of testosterone*.

Intersex people are born with atypical physical sex characteristics, including genetic, hormonal and anatomical differences. Many forms of intersex exist; it is a spectrum or umbrella term, rather than a single category. Intersex differences may be apparent at birth. Some common intersex variations are diagnosed prenatally. Some intersex traits become apparent at puberty, or when trying to conceive, or through random chance.

Intersex bodies do not meet societal expectations. Cultural, familial and medical attitudes govern to which sex we are assigned. Surgical and other medical interventions are made to ensure we conform to those norm, to erase intersex differences. This has profound consequences for our physical and mental health.

Intersex people are regarded by medicine as having ‘Disorders of Sex Development’ (DSD). The term and framework ensure that sterilisations and normalising genital surgeries continue today, in Australia, to make infants and children “appear” stereotypically male or female. This happens everywhere in the word where western medicine is practiced.

A 2006 clinician document that coined DSD defined “psychosocial” therapeutic rationales as including “minimizing family concern and distress“, and “mitigating the risks of stigmatization and gender-identity confusion“.

A medical paper published this year still describes an intersex birth as a “challenging clinical emergency“.

It isn’t just an issue for children: the impact is lifelong.

Adults, too, are subject to coercion. In competitive sports, the IOC for example mandates that national authorities: “actively investigate any perceived deviation in sex characteristics“. Other sports codes follow suit. This means that butch women in particular are at risk of being singled out for humiliation and unnecessary medical treatment. A British Medical Journal article in April documented how 4 women athletes from developing nations were subjected to clitorectomies and removal of their gonads – with no guarantee of continued access to medical treatment for the rest of their lives.

Most intersex people are heterosexual, most are not trans, we’re a different community. We should not be automatically “queered“. so what’s the relevance for LGBT people?

Research on intersex foetuses and infants is longstanding, and has been used (so far unsuccessfully) to establish a cure for homosexuality.

A 1990 peer-reviewed article by Heino Meyer-Bahlburg entitled, “Will Prenatal Hormone Treatment Prevent Homosexuality?” considered how research on intersex differences could be used to explore the potential “prenatal hormone screening or treatment for the prevention of homosexuality”. While his research showed the “scientific groundwork” to be “insufficient” at that time, prenatal screening and treatment of intersex traits continues.

A 2010 medical paper shows: “low interest in babies and men – and even interest in what they consider to be men’s occupations and games – as “abnormal,” and potentially preventable with prenatal dex”.

Prenatal dexamethasone treatment remains available in Australia, the UK and most of Europe – but not Sweden, which has stopped prenatal treatment due to risks that include cognitive impairment.

In some intersex variations, such as 47,XXY, we know that up to 88% of foetuses identified are terminated, framed as major genetic defects – despite the World Health Organization acknowledging no impact on life expectancy and XXY often goes undiagnosed.

Here in the UK, many of the most common and best known intersex variations, AIS, 5-alpha Reductase, CAH, are all “severe genetic conditions” able to be screened out prenatally, via Preimplantation Genetic Diagnosis. Those “severe conditions” include those of all 4 elite women athletes subjected to clitorectomies and sterilisation for social, non medical, reasons. They include the world’s first openly intersex mayor, in Australia. They are less likely to be born here, and let’s be clear: there is no reason to screen out 5-alpha Reductase or AIS other than perceived non-conformity with sex and gender norms.

In October 2013, the American Journal of Bioethics published 11 papers on the ethics of genetic testing in embryo and cells before IVF. Many findings were similar. A quote from one of them: issues of sex, gender identity and sexual orientation are intertwined.

In Australia, we have helped to secure:

Progress on intersex human rights is slow and patchy, but progress is possible. Scrutiny and awareness make it possible, so thanks for listening.

Watch the panel discussion at the University of Glasgow website. 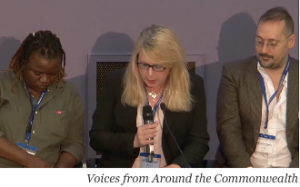 Possibly the best talk of #LGBTIHRC so far by @morgancarpenter on intersex. Never learned so much in 6 minutes!

More details about this conference

* please note that we don’t know if Dutee Chand has an intersex variation or not; she has simply been found to have a specific outcome from a contentious hormonal test.