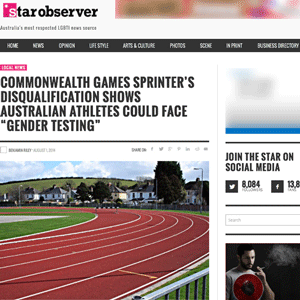 We are disturbed by reports that Indian woman athlete Dutee Chand has been denied a position in the Indian Commonwealth Games team, on the basis of a test result showing elevated natural levels of blood testosterone. It also appears that Chand discovered the news via press reports, and not directly from sports or medical authorities. In comments to the Times of India, she stated:

So far nobody from the Sports Authority of India (SAI) or the Athletics Federation of India (AFI) has spoken to me about any medical test or its results. The only information I have is from the newspapers.

As Santhi Soundarajan, an athlete who has faced similar circumstances, states, the process has been one of public humiliation:

They have tested her at the last minute, humiliated her and broken her heart.. All sorts of things have been written about her. Now, if she re-enters the sports field, things will not be normal. Even if she takes treatment, people will kill her with their suspicious gaze.

These test results have a problematic history due to associated medical treatment. Earlier this year, the British Medical Journal reported on four recent cases of elite women athletes with intersex traits who were subjected to sterilisation and partial clitoridectomies after discovery during medical testing – to enable participating in competitive sport. Clitoridectomy is understood to be a form of Female Genital Mutilation. This is deeply troubling, and we would be horrified to find that that Dutee Chand was obliged to follow a similar path.

Sports authorities mandate sex testing of women athletes as part of an explicit process to “actively investigate any perceived deviation in sex characteristics“. Such issues are entangled with perceived sexual orientation and issues of ethnicity and nationality.

Dutee Chand should be allowed to run, as she is.