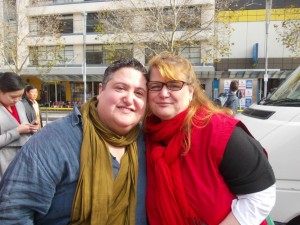 UPDATE, 24 August: Details of the Senate submissions and hearing have moved here.

Thank you for the introduction and thank you to Equal Love for continuing the campaign for marriage equality for 10 years!

I’m an intersex person and I’m embarrassed. Embarrassed of our country’s leaders and their commitment to treat certain couples with contempt. To deny us rights purely based on our sex or gender. Embarrassed.

Discrimination is not ok – but that’s what’s enshrined in the Commonwealth Marriage Act. Not love, but discrimination.

When the Australian Parliament changed the Marriage Act to specify that marriage is between a man and a woman to the exclusion of all others I was confused. What does that mean for a person like me? Intersex people like me are born biologically part male and part female. That’s our nature. Can we marry at all? If we marry, even as a heterosexual couple, will someone later question the validity of our marriage?

I was legally married to a man once – I had a birth certificate that said I was female so the government allowed me to marry him.

I could have married a woman too –but I would have had to pretend to be a man. I don’t want to pretend. I am what I am. I’m not ashamed of what nature made me. I should be able to marry whom I want. If it doesn’t matter to me if my partner is male or female, why should it matter to the Parliament? Under the current Marriage Act I can’t marry anyone unless I deny my true self and pretend to be only one sex, and that of the opposite sex to my partner. Why should I be forced into this nonsense?

I’m embarrassed. When Manja and I went to New Zealand to get married last year people couldn’t understand why Australia was so backwards. It didn’t seem right to anyone that we couldn’t marry.

When we married in New Zealand everyone there welcomed us. The Mayor of Dunedin gave us permission to marry in the Council Chambers, and when we were taking our photos after the ceremony we even had school kids and elderly locals come up to us to congratulate us on our wedding. It was lovely. We were a part of the community and genuinely welcomed. Our marriage didn’t undermine ‘family values’, ‘the fabric of society’ or anything like that. If anything, our marriage enhanced it. It showed that marriage was an important commitment and something we value. We value it so much we went overseas to do it.

It’s disheartening that in Australia I was able to foster children, get elected to a council, become Mayor, work for Defence and the Australian Federal Police, etc., but when it comes to rights, I am denied the right to marry who I want based on sex.

When Manja and I were leaving New Zealand having just been married the week before, it dawned on us that as soon as we disembarked from our flight in Melbourne we would no longer be recognised as married. I felt embarrassed and ashamed of our country. A country I am otherwise proud of.

Our marriage is recognised in:

I’m proud of our community but I am embarrassed by the leadership of this country; both with the current federal Liberal government, and the former Labor government. The community is largely supportive of marriage equality, so I don’t understand why they don’t just change the law. They are supposed to represent community values.

We all must work as a community and focus on Marriage Equality – two people being able to marry irrespective of their sex or gender. This includes Intersex people and some trans people and gender diverse people.

Same Sex Marriage is about two people of the same biological sex or gender identity, but this is not inclusive of everyone. It still denies people like me from marriage, and renders intersex people invisible.

To be acknowledged for who and what I am, no more, no less. Not for acclaim, not for approval, but, the simple truth of that recognition. This has been the elemental drive of my existence, and it must be achieved, if I am to live or die with dignity.