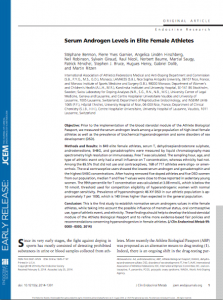 The Journal of Clinical Endocrinology and Metabolism this month contains a report on research by the International Association of Athletics Federations’ Medical and Anti-Doping Department and Commission, and others. It states that there is “no clear scientific evidence” for current policies excluding elite intersex women athletes from competitive sport on the basis of high androgen levels:

With the exception of data extracted from doping programs in female athletes in the former German Democratic Republic (7), there is no clear scientific evidence proving that a high level of T [testosterone] is a significant determinant of performance in female sports.

Further, the current policy is based upon an arbitrary definition:

A hot point of discussion here concerned an independent expert medical panel recommending that the athlete is not eligible to compete in women’s competition if she has normal androgen sensitivity and serum T levels above the lower normal male range (10 nmol/L). This arbitrary definition was chosen in the absence of normative statistics of androgen levels in a high-level athlete female population.

The study examined the hormone profiles of 849 elite women athletes who provided blood samples in order to comply with antidoping regulations. For athletes with intersex variations, receipt of test results may well be the moment when they first discover their intersex status.

The report undermines the case for current policies excluding elite women athletes with “hyperandrogenism” from competitive sport. A woman athlete with high androgen levels was excluded from the Commonwealth Games this year in Glasgow. The British Medical Journal reported this April how four elite intersex women athletes were subjected to sterilisation and “partial clitoridectomy” (FGM) in order to continue to compete.

The unnecessary and coercive context for “partial clitoridectomy” and sterilisation is of enormous concern. It forms part of a broader focus on athletes’ physical characteristics and perceived femininity or masculinity:

Research on what constitutes “normal” women’s genitalia shows it to be subjective; a recent Senate inquiry found this research “disturbing“.

The research also notes the higher population figures for intersex traits amongst the 849 women (similar data is curiously not available for men):

Within the female population studied, six subjects (five plus one who was previously declared eligible to compete) were later identified with a hyperandrogenic 46 XY DSD (four with 5alpha-reductase deficiency and two with partial androgen insensitivity). Thus, the calculated prevalence of this type of medical condition within this cohort of high-level female athlete is 7.1 per 1000. Because, in this study, screening for SRY was not performed (we looked only for women that were hyperandrogenic), it is possible that the actual prevalence of 46 XY was even higher. Morel et al (33) estimated a 46 XY DSD occurrence rate of 1 in 20 000 in the general population. Although the occurrence may change from one ethnic group to another, our reported prevalence remains approximately 140 times higher than expected in the general population.

As an aside, we note that XY 5alpha-reductase deficiency, present in four cases, and AIS present in two, are both regarded in the UK as “sufficiently serious” traits meriting de-selection from the gene pool via IVF. In our view, the only reasons for this are related to perceptions of sex non-conformity and poorly-evidenced, perceived needs for surgical and/or hormonal “correction”.

Finally, claims of perceived masculinity and performance advantages are by no means unique to elite intersex women athletes; these issues are also faced by trans women, and also women with PCOS. The research acknowledged that PCOS (not an intersex variation) is also common amongst elite women athletes:

It is time to discontinue arbitrary and unscientific policies designed, in our view, to reinforce heteronormative and sexist notions of femininity in sport.