Events include proposals for a SOGI (Sexual Orientation and Gender Identity) resolution aimed at eliminating violence and discrimination that does not expressly include intersex status or intersex issues. However, the elimination of such violence and discrimination, and related improvements in broader social expectations regarding sex and gender roles, benefits intersex people too. We welcome the resolution and hope it will be adopted by the Human Rights Council.

Morgan Carpenter prepared a two minute statement to bring the attention of the Human Rights Council to human rights abuses affecting people with intersex variations. Unfortunately, timings didn’t work out for Morgan to deliver this personally, however André du Plessis of ILGA kindly delivered this statement on 22 September:

We face deep-seated stigma and human rights abuses. We may be subjects of infanticide in Uganda; or sex assignment based on parent attitudes towards dowries in Malaysia. Intersex girls are excluded from policies preventing Female Genital Mutilation. We’re being cleansed from the gene pool in the UK and other countries.

Despite 60 years of medical research, there is no firm evidence of good outcomes.

In April, the British Medical Journal reported on 4 elite women athletes with intersex traits, all from developing countries. The athletes were sterilised in a clearly coercive process, to compete in sport. The International Olympic Committee mandates active investigation of “any perceived deviation in sex characteristics”. The report said:

“The most striking and troubling illustration of these concerns is that all of the athletes in the recent report had “partial clitoridectomy.” Clitoridectomy is not medically indicated, does not relate to real or perceived athletic ‘advantage’… Moreover, this technique … has poor cosmetic outcomes and damages sexual sensation and function. Clitoral surgery should have no role in interventions undertaken for athletes’ eligibility or health.”

Other outcomes from medical treatment include chronic pain and trauma.

The text was reviewed by the board of OII Australia, and also by Mauro Cabral and Dan Christian Ghattas. The final text is the responsibility of Morgan Carpenter. 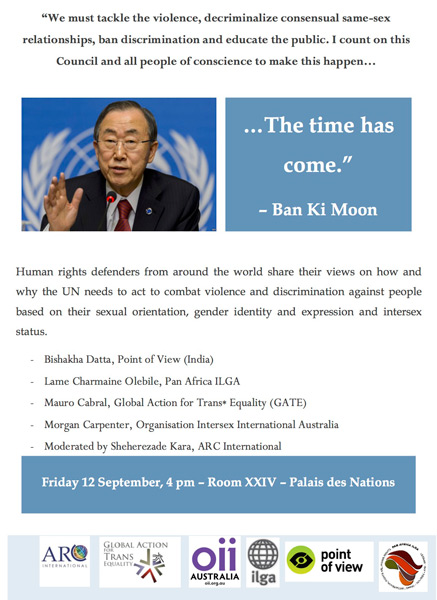 Side event: “The time has come”

It came as the UN Human Rights Council prepares to discuss a resolution on sexual orientation and gender identity. We welcome the resolution and hope it will succeed. However, we understand that intersex issues will be not be part of the resolution. Indeed, intersex health and human rights issues are poorly addressed by sexual orientation and gender identity attributes, hence Australia’s adoption of the new attribute of intersex status.

The event took place on Friday 12 September at 4pm local time in Geneva, Swtizerland. The event was recorded and will later be available via Youtube.

Our participation in these events is wholly and very kindly supported by GATE and ILGA; it would be impossible without that support.