Right now, we can’t think of any other form of bodily diversity that is subject to such relentless negative and salacious press coverage, and so rare a case of positive reporting.

For people who have not been following the story of Taylor Chandler, who reports she was born intersex and recently in a relationship with Michael Phelps, many hundreds of press reports can be Googled. We don’t recommend them.

We commend this article in The Guardian to you, by OII-USA‘s Claudia Astorino. 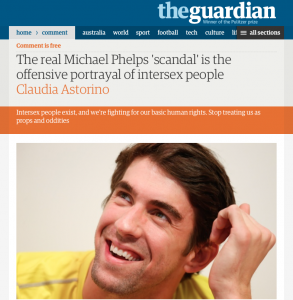 To the media outlets interested in writing truthfully about intersex people: focus on who we are as human beings. Raise awareness that we exist, and that we’re fighting for our basic human rights: it’s been routine since the 50s to medically – often surgically – alter intersex kids’ bodies without their consent, so that we can live as “normal” girls and boys. Intersex activists like myself have been working to stop these violations since the early 90s in the UK and the US – and now globally.

There are some opportunities for journalists to shine an important light on the issues that intersex people face in a responsible way – for instance, but covering Indian runner Dutee Chand’s ban from competing in the Commonwealth Games and, maybe, the Olympics for having naturally high testosterone levels… There are articles that I want read, to see exist in the world and in which I could see myself reflected – but we can’t be written about as a props or oddities. Reporters need to write about us as the complex people we are, and about us as more than our identities as intersex people.

If you’re personally affected by this or similar news stories, please contact us or the AISSGA. Both organisations provide peer support on a volunteer basis. The QLife helpline may be able to assist with immediate support.

Please know that you’re not alone.