We would like to thank Shon Klose, and ABC journalist Emma Sleath, for this personal interview published by ABC Alice Springs. Shon is the diversity spokesperson for Sisters and Brothers NT. 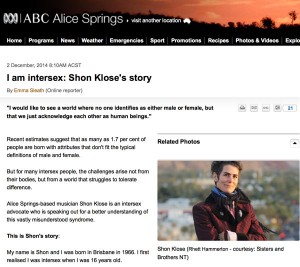 There are a lot of people out there who are experiencing trauma and mental health issues because of the way they’ve been treated in a pathologised kind of way around their natural born bodies.

Intersex people have been part of society since the birth of human beings. It’s a naturally occurring biological condition. There are 40 different variations and they can be chromosomal, hormonal, genetic or physical – it can be one or a combination of these. In fact intersex conditions are as common as red hair and yet here we are in 2014 and most people do not understand what intersex means.

Intersex people are often given medical intervention when they are babies, or small children, so I guess I urge people, surgeons and families to address their own phobias about difference, to get to the bottom of it, to unpack those thoughts.

We’re hopeful this will be followed by one or two more intersex stories out of Alice!

We also extend our support to people at ABC regional offices at a time of upheaval. Local offices perform a vital function in telling local stories and news, sometimes of national import.

Read more and listen to interviews at ABC Alice Springs.