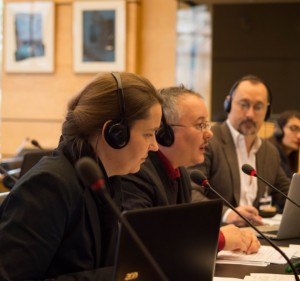 In Concluding observations on the initial report of Germany, the Committee on the Rights of Persons with Disabilities issued the following statement on 17 April 2015:

Protecting the integrity of the person (art. 17)

37. The Committee is concerned about: a) the lack of available data of involuntary placement and treatment; b) the practice of forced sterilisation and coercive abortions by substituted consent of adults with disabilities; c) the lack of implementation of the 2011 recommendations CAT/C/DEU/CO/5, para. 20, regarding upholding bodily integrity of intersex children.

38. The Committee recommends that the State party take the necessary measures, including of a legislative nature to:

(a) Repeal section 1905 of the German Civil Code and explicitly prohibit in law sterilisation without the full and informed consent of the individual concerned, eliminating all exceptions including by substituted consent or upon court approval;

(b) Ensure that all psychiatric treatments and services are always delivered with the free and informed consent of the individual concerned;

(d) Implement all the recommendations of CAT/C/DEU/CO/5, para. 20 relevant to intersex children.

20. The Committee takes note of the information received during the dialogue that the Ethical Council has undertaken to review the reported practices of routine surgical alterations in children born with sexual organs that are not readily categorized as male or female, also called intersex persons, with a view to evaluating and possibly changing current practice. However, the Committee remains concerned at cases where gonads have been removed and cosmetic surgeries on reproductive organs have been performed that entail lifelong hormonal medication, without effective, informed consent of the concerned individuals or their legal guardians, where neither investigation, nor measures of redress have been introduced. The Committee remains further concerned at the lack of legal provisions providing redress and compensation in such cases (arts. 2, 10, 12, 14 and 16).

The Committee recommends that the State party:

(a) Ensure the effective application of legal and medical standards following the best practices of granting informed consent to medical and surgical treatment of intersex people, including full information, orally and in writing, on the suggested treatment, its justification and alternatives;

(b) Undertake investigation of incidents of surgical and other medical treatment of intersex people without effective consent and adopt legal provisions in order to provide redress to the victims of such treatment, including adequate compensation;

(c) Educate and train medical and psychological professionals on the range of sexual, and related biological and physical, diversity; and

(d) Properly inform patients and their parents of the consequences of unnecessary surgical and other medical interventions for intersex people.

A statement was made by the Committee on the Rights of the Child, in Concluding observations on the combined second to fourth periodic reports of Switzerland on 4 February 2015.

42. While welcoming the adoption of a new provision of criminal law prohibiting genital mutilation, the Committee is deeply concerned at:

(a) The significant number of girls living in the State party who are affected or threatened by genital mutilation; and

(b) Cases of medically unnecessary surgical and other procedures on intersex children, which often entail irreversible consequences and can cause severe physical and psychological suffering, without their informed consent, and the lack of redress and compensation in such cases.

(a) Continue and strengthen preventive and protection measures to address the issue of female genital mutilation, including training of relevant professionals, awareness-raising programmes and the prosecution of perpetrators of these acts; and

(b) In line with the recommendations on ethical issues relating to intersexuality by the National Advisory Commission on Biomedical Ethics, ensure that no-one is subjected to unnecessary medical or surgical treatment during infancy or childhood, guarantee bodily integrity, autonomy and self-determination to children concerned, and provide families with intersex children with adequate counselling and support.

Thank you to OII Germany and Zwischengeschlecht, Global Action for Trans Equality for supporting the briefing, and the rapporteur for Germany, Ms Diane Kingston OBE.

OII Australia submitted a Letter of Support to the UN Committee on the Rights of the Child in June 2014. OII Australia president Morgan Carpenter was also pleased to moderate a thematic briefing by our partners and friends OII Germany and Zwischengeschlecht to the CRPD on intersex issues on 26 March 2015.

We look forward to the day when a UN Committee makes such observations about Australia. In this connection, we were delighted to contribute to an NGO submission on the UN Universal Periodic Review, 2015, signed by 190 Australian organisations.

Photo: Thematic briefing to CRPD, 26 March 2015; photo by Nigel Kingston, supplied by Diane Kingston OBE – kind thanks to both!