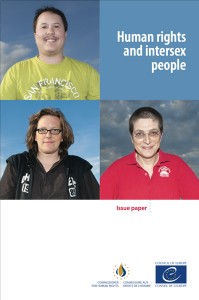 We warmly congratulate the Council of Europe, Commissioner for Human Rights Nils Muižnieks, and report author Silvan Agius for a landmark report on the human rights of people with intersex variations. The report contains 8 clear and simple recommendations, and strong analysis.

Binary classifications of sex and gender are omnipresent in our society and inform the way we understand and organise the world around us. The classification of humankind into two categories – “F” (female) and “M” (male) – and the entrenchment of those categories in identification documents, expose people who do not fit neatly into those two categories to human rights breaches. Among them, intersex persons are especially vulnerable.

Stereotypes hinging on the supposed dichotomy of gender as well as the medical norms of so-called female and male bodies have allowed for the establishment of routine medical and surgical interventions on intersex people, even when such interventions are cosmetic rather than medically necessary, or when those concerned have not been adequately consulted or informed prior to these procedures. Secrecy and shame around intersex bodies have permitted the perpetuation of these practices for decades, while the human rights issues at stake have remained for the most part unaddressed.

The document makes welcome reference to the Australian Senate report, “Involuntary or coerced sterilisation of intersex people in Australia”, even while that report has not yet been implemented by any Australian government. The following statement by the Senate committee is quoted:

There is frequent reference to “psychosocial” reasons to conduct normalising surgery. To the extent that this refers to facilitating parental acceptance and bonding, the child’s avoidance of harassment or teasing, and the child’s body self-image, there is great danger of this being a circular argument that avoids the central issues. […] Irreversible medical treatment, particularly surgery, should only be performed on people who are unable to give consent if there is a health-related need to undertake that surgery, and that need cannot be as effectively met later, when that person can consent to surgery.

The Council of Europe affirm the same principles, and add:

Intersex persons’ right not to undergo sex assignment treatment must be respected.

The Council of Europe document benefitted from broad European and global consultation, with the contributions of intersex activists, and legal and medical experts. It included medical experts such as Mika Venhola, who support a human rights-based approach to intersex issues. Morgan Carpenter, president of OII Australia, was delighted to participate in a consultation leading to this report, in Malta in 2013. He comments:

This is a landmark report that identifies several crucial areas of reform to improve the health and human rights of people with intersex variations. It calls for an end to non-necessary “normalizing” medical interventions and the pathologisation of intersex people; in their place, intersex people and our families need access to peer and family support. The report calls for the inclusion of intersex people in anti-discrimination legislation, access to justice and our involvement in research and reform measures. It also calls for flexibility and autonomy in self-identifying sex and gender.

While Australia has made numerous advances, we still remain subject to non-necessary and harmful medical interventions, without reparation. We lack visibility and clear understanding of intersex issues – and the resources to tackle these issues. We still also lack autonomy over how our sex and gender is designated in official documents; recent developments have often made harmful and inappropriate assumptions that intersex people, with an extraordinarily diverse range of atypical sex characteristics, are an homogeneous third sex.

Australian governments must also step up and act.

We warmly congratulate the Council of Europe on publishing this report. It is a pleasure to see included a set of photographs by Del LaGrace Volcano.

All 8 recommendations are published below. 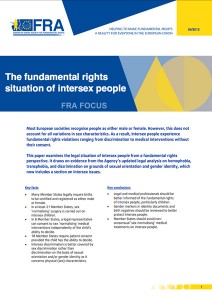 Simultaneously, the European Union Agency for Fundamental Rights published a Focus Paper on intersex people. It comments that:

Intersex people will remain vulnerable to discrimination … as long as they are medically diagnosed as men or women with a health disorder.