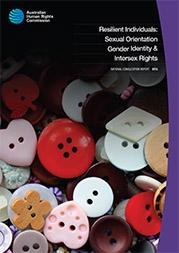 The report notes that forced medical interventions continue today in Australia, and it calls for Commonwealth and States/Territories to work together and implement the 2013 Senate Committee report on “Involuntary or coerced sterilisation of intersex people in Australia“:

Addressing the issues raised in these consultations also requires the cooperation of Commonwealth, state and territory governments to address cross-government law and practice. As a consequence, the following should occur promptly: …

4. Implement the recommendations of the Australian Senate Community Affairs Committee’s 2013 Report on the Involuntary or Coerced Sterilisation of Intersex People in Australia

A number of submissions also questioned the rationale of surgical interventions to ‘normalise’ the appearance of intersex children and infants, suggesting that this objective was informed by redundant social constructs around gender and biology.173 Submissions emphasised that in order to address these gaps, education policies must contain adequate recognition of the existence of intersex bodily diversity…

On forced cosmetic genital surgeries on infants and children:

While data on the prevalence of the surgical procedure is not publically available, evidence of its continuing practice in Australia was provided in a number of submissions to the consultation.181

By law, Australia still allows the practice of cosmetic genital surgery on infants and children with intersex variations. Such practice is prohibited on non-intersex children, excluding the practice of male circumcision.182 The rationale for this procedure is essentially cultural and generally based on psychosocial reasoning such as minimising family concern and distress and mitigating the risks of stigmatisation and gender identity confusion.183

The report makes important points about involuntary assignments to a third sex classification, and also about research needs, resourcing, widespread conflation of “gender identity” and “intersex status”, education and sport.

OII Australia president, Morgan Carpenter, is quoted in the report:

One of our key human rights issues is not really the existence of binary genders, but what is done medically to make us conform to those norms.

We note that, while this report went to press, the UN Office of the High Commissioner for Human Rights and the Council of Europe’s Human Rights Commissioner have both called for an end to unnecessary forced medical interventions on intersex people.

This report provides a firm basis for action by the Commonwealth and States and Territories to act and protect the human rights and health of people born with intersex variations, as well as other LGBTI people. Thank you to all the reports authors, contributors and those making submissions. Thank you to Tim Wilson for stating so clearly that bodily autonomy is a basic human rights, and involuntary or coerced sterilisations are a breach of that.