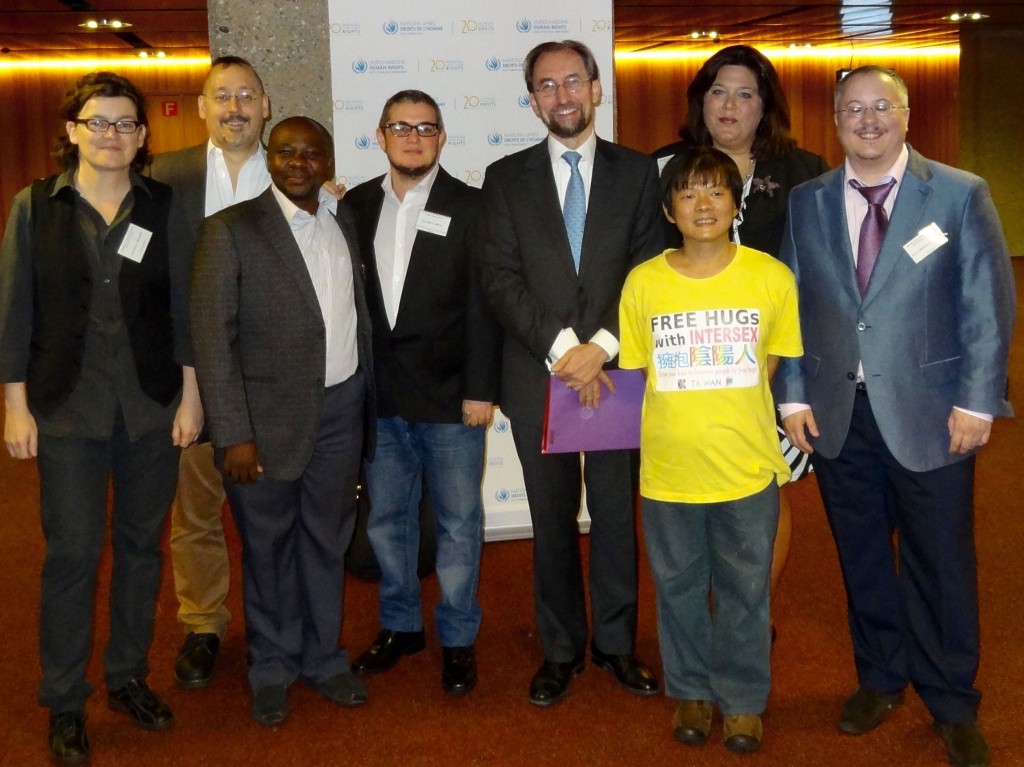 Amongst his opening remarks, the High Commissioner commented to the expert meeting:

All human beings are born equal in dignity and rights. Those foundational, bedrock principles of universality and equality mean that all of us, without exception, and regardless of our sex characteristics, are equally entitled to the protections of international human rights law.

The expert meeting heard evidence that involuntary and coerced medial treatments to modify sex characteristics are medically unnecessary, irreversible, based on social stigma and fear, and can cause life-long physical and psychological trauma.

Here are the opening remarks in full by the High Commissioner for Human Rights:

This is a historic meeting: the first time that the United Nations has convened a discussion specifically to address the human rights situation of intersex persons.

I am happy to see among us UN and regional mandate holders, intersex experts, colleagues from other UN agencies, experts from national institutions and academia, civil society activists and health professionals. I thank all of you for joining us to contribute to our common goal of ending human rights violations against intersex people.

When I started as High Commissioner a year ago, I knew little about intersex people. I don’t think I was alone in this: it reflects a general lack of awareness. Too many people assume, without really thinking about it, that everyone can be fitted into two distinct and mutually exclusive categories: male or female.

But in fact, human beings – like most living beings – are more diverse and complex than that. Our diversity – the differences between our experiences and perspectives, as well as the shapes of our bodies – is something that we should celebrate and protect, in all its forms.

All human beings are born equal in dignity and rights. Those foundational, bedrock principles of universality and equality mean that all of us, without exception, and regardless of our sex characteristics, are equally entitled to the protections of international human rights law.

Unfortunately, the myth that all human beings belong to one of two distinct and separate sexes is deep-rooted, and it contributes to the stigma, and even taboo, attached to being intersex.

This is linked to the very serious human rights violations that you are here today to discuss. They include medically unnecessary surgeries and other invasive treatment of intersex babies and children; infanticides of intersex babies; and widespread and life-long discrimination, including in education, employment, health, sports, accessing public services, birth registration and obtaining identity documents.

Such violations are rarely discussed and even more rarely investigated or prosecuted. The result is impunity for the perpetrators; lack of remedy for victims; and a perpetuating cycle of ignorance and abuse.

But there are signs that the tide may at last be turning, thanks to the tireless work of intersex organizations and human rights defenders, over many decades.

There have been clear recommendations by several human rights mechanisms urging States to take steps to address these violations. In a few States, there have been important court judgments and recently, new laws have begun to protect the rights of intersex people.

But much more must be done – both to raise awareness, and to document and prevent violations. Even in those countries that have taken positive steps, we need to bridge the gap between legislation and the lived realities of intersex people.

My Office is committed to this work. In addition to convening this meeting, we released, earlier this month, a factsheet on the human rights of intersex people, as part of our ongoing Free & Equal public information campaign. We are also giving increased attention to the specific situation of intersex people in our work and reports. While our recent report to the Human Rights Council focused – as mandated – on violations based on sexual orientation and gender identity, it also highlighted specific violations faced by intersex people, and made a number of specific recommendations to States.

You have important work ahead of you in the next two days – taking stock of progress and challenges, reviewing lessons learned, and identifying opportunities and priorities for change in the years ahead.

I wish you a productive meeting, and I look forward to hearing about your discussions.