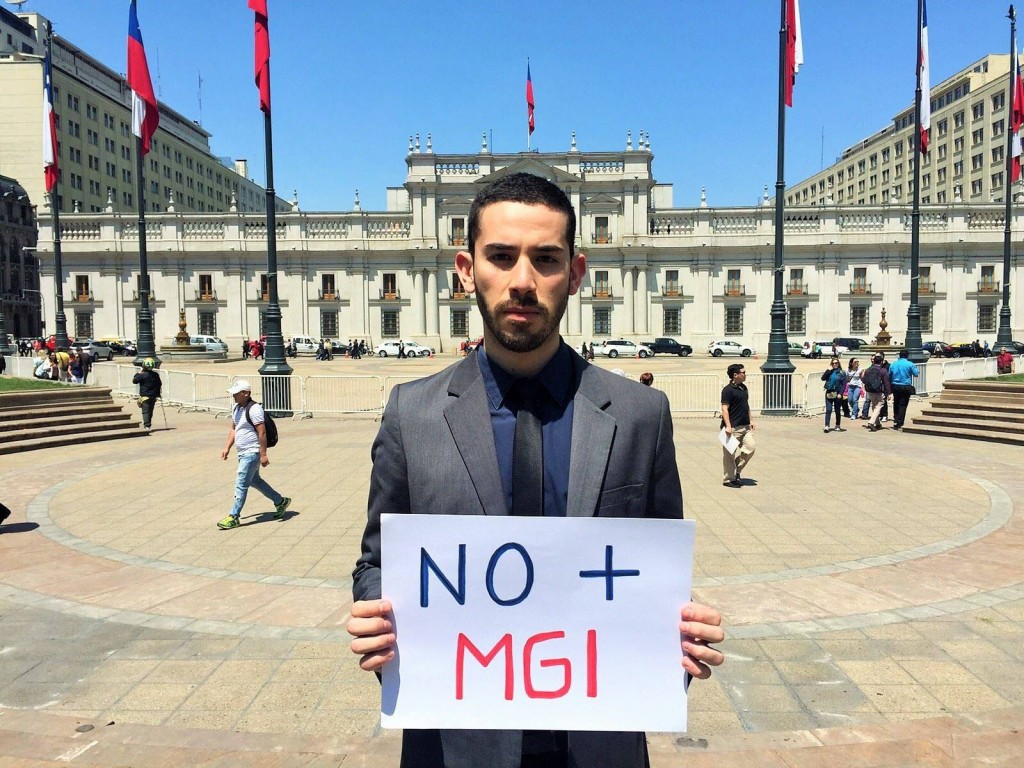 The Chilean Ministry of Health has issued instructions to its national health sector to stop “normalising” medical interventions on intersex infants and children. This guidance is a global first: the first time that a health ministry has shown leadership in taking this step without legislation or legal action. They have done this while awaiting the development of human rights-affirming treatment protocols and legislation to offer protection from discrimination on grounds of “sexual characteristics”.

Thank you to the Ministry, and to work by Camilo Godoy Peña, Andres Rivera Duarte and everyone who has worked towards this major step forward.

UPDATE: Circular 7 of 23 August 2016 has unfortunately rescinded the earlier circular, citing a 2006 clinical “consensus” statement. In particular, the new circular permits surgical interventions to make children’s genitals appear more typical, despite a lack of evidence in support of such interventions, and much evidence of long-term harm. The 2006 clinician statement permits early surgeries to manage parental distress and claims of potential gender identity confusion.

The instructions were published in Circular 8, 22 December 2015, entitled “Instructions on aspects of health care to intersex children“. The circular instructs the ceasing of “unnecessary “normalization” treatment of intersex children, including irreversible genital surgeries, until they are old enough to decide about their bodies“, while work takes place to develop protocols that meet human rights standards.

Publication of the report builds upon previous work at international and national level. The Circular quotes a 2013 report by the Inter-American Commission on Human Rights, an Argentinian human rights report, and a 2015 World Health Organization report on sexual health and the law. Mauro Cabral has played a significant role in each of those arenas.

The Circular highlights findings of UN committees on human rights, including 2015 reports by the Committee on Economic, Social and Cultural Rights and the Committee on the Rights of the Child. The work of Camilo Godoy Peña and Andres Rivera Duarte has been significant in those arenas. 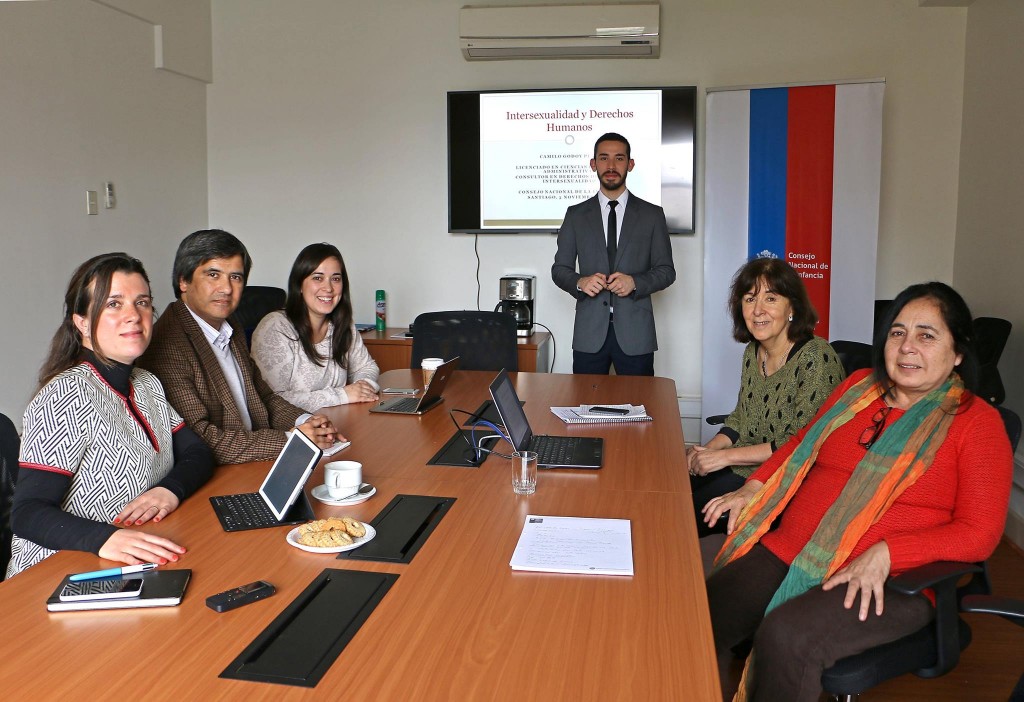 Camilo Godoy Peña presenting on intersex and human rights to the National Council on Childhood, November 2015.

Camilo highlights the creation of a National Council on Childhood by president Michelle Bachelet, on her election to a second term in 2014:

She created the National Council on Childhood, whose biggest aim was to change Chilean law and public policies related to children and to adapt it to the Convention on the Rights of the Child, to look at children as rightsholders, rather than subjects of law. The most important authority on the Council is Estela Ortiz and I introduced intersex issues to her for the first time on November 18, 2014. During 2015, meetings took place with many government agencies. One of the most important milestones took place on June 24th, in a long meeting with the Minister of Health, her advisors (political and technical) and her whole team. I gave them a draft human rights protocol, with recommendations coming from intersex forums, United Nations reports, and general human rights information. That day they promised to change the situation and to create a working group.

Probably the most important and symbolic moment ocurred on October 26th. The world was celebrating Intersex Awareness Day, and I went early in the morning to the Government Palace (Palacio de La Moneda, Santiago de Chile) to give a letter on the situation of intersex people to the President Michelle Bachelet. One of the points of the letter was: “I’ve been advising the Ministry of Health and National Council on Childhood but intersex people, especially babies, are still unprotected”… Less than a week after that, I received an official response where the government said that the Ministry of Health and National Council on Childhood will work together to change that, and to give me a response. It was an order from the President.

This year, thanks to our work, the attribute of “sexual characteristics” has now also been added to article 8 of non-discrimination of a Bill on “System of guarantees of Rights of the Childhood”. The Bill seeks to adapt Chilean legislation to the Convention on the Rights of the Child. 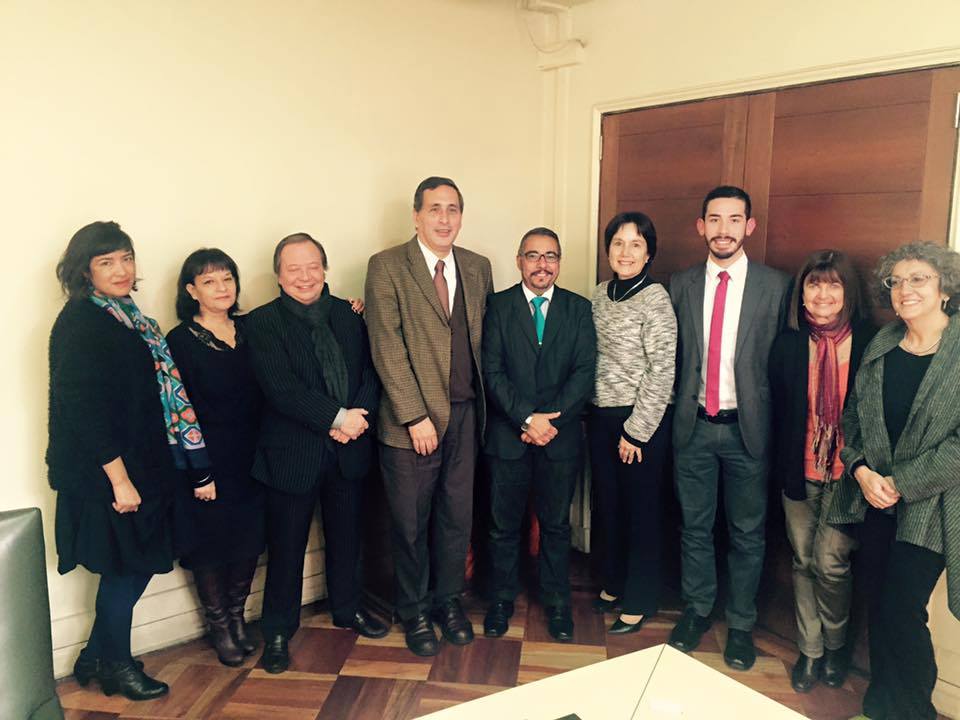 Andres Rivera Duarte and Camilo Godoy Peña meet with government officials on 24 June 2015. Andres subsequently appeared as a civil society representative before the UN Committee on the Rights of the Child in Geneva.

This is an unofficial translation in English:

Ministry of Health
Ministry of Public Health
Division of Disease Prevention and Control
Department Life Cycle (this is probably the most important place for us because on it you have some ally people -who became friends with me in the process – and did big efforts fighting with doctors who opposed to the circular).

Instructions on aspects of health care to intersex children

We have been confronted with several situations that have us very concerned, regarding operative processes related to children with indeterminate sex. Some associated with genetic, endocrine and other pathologies regarding sex determination. (See Annex)

Faced with these complex situations, actions have sometimes proceeded swiftly, not taking into account the rights of children and adolescents, the recommendations of WHO and those made to Chilean State by the Human Rights Committee (see Annex).

In an effort to proceed doing things in the best possible way for the good of the children and adolescents affected, we are committed to build a protocol to regulate health care for intersex children. This will be prepared by experts from multiple disciplines with experience in the field.

Considering the above background:

It is further requested that each health service will nominate a person to lead management of cases, and compile records of cases.

Without further particulars, asking for the widest dissemination to the contents of this Circular, as of the date stamped, this document enters into force,

However, the allocation of sex at birth is not always an exact algorithm and this we find with intersex, a term that refers to “all those situations where the sexual body of an individual varies from the female or male bodily standards culturally in force. Historically understanding of this specific biological identity has been mediated through the mythological figure of the hermaphrodite, a person is born “with ‘both’ sexes, that is, literally, with a penis and vagina.” These expressions are also used in legal language and medical language. Currently, both the LGTBI movement, as in the medical and legal literature, it is considered that the term intersex is technically the most suitable (CIDH, 2013).

So then, intersex people are all those whose bodies vary regarding the cultural and medically accepted standards for masculine or feminine, and bodily differences present at birth are not a disease and do not, per se, pose a risk to life. However, due to those differences, they are often subjected to surgical interventions that are medically unnecessary, irreversible and without the informed consent of the recipients, beginning in the first months of life.

The different medical classifications of bodies grouped under the term “intersex” may include: the number and patterns of chromosomes (eg, XXY or XO), dissimilar tissue reactions to sex hormones (eg, having an ovary and testis, or gonads containing both ovarian and testicular tissue) as well as different hormone balances. So too the genitals of some intersex people may not be clearly identifiable as male or female, they may be identified as undefined or indeterminate at birth. However, for others, detection occurs later, during puberty or even later (INADI, 2015).

The Inter-American System of Human Rights has recognized these treatments as systematic violations of human rights (2013) noting that they may constitute torture (2015). The Universal Human Rights System has expressed concern about the specific situation of these people in Chile through three treaty bodies: the Human Rights Committee (2015), the Committee on Economic, Social and Cultural Rights (2015) and recently the Committee on the Rights of the Child (2015). Recently the main recommendation to the State of Chile is to develop a protocol to ensure the protection of human rights of intersex people – especially children and adolescents – and ensure they will not be subjected to such surgery until they are old enough to make decisions on their bodies themselves (Committee on the Rights of the Child, 2015). This implies the recognition of the progressive autonomy of children in cross-cutting principles of the Convention on the Rights of the Child, ratified by the Chilean government in 1990.

The document “Sexual health, human rights and the law” by the World Health Organization (WHO), noted: “A major concern for intersex people is that so-called sex normalizing procedures are often undertaken during their infancy and childhood, to alter their bodies, particularly the sexual organs, to make them conform to gendered physical norms, including through repeated surgeries, hormonal interventions and other measures. As a result, such children may be subjected to medically unnecessary, often irreversible, interventions that may have lifelong consequences for their physical and mental health, including irreversible termination of all or some of their reproductive and sexual capacity. Medical procedures may sometimes be justified in cases of conditions that pose a health risk or are considered life-threatening. Such procedures, however, are sometimes proposed on the basis of weak evidence, without discussing and considering alternative solutions” (World Health Organization, 2015 : 27).

This is the first time in history a Ministry of Health is calling – through an official public instrument – to “stop unnecessary “normalization” treatment of intersex children, including irreversible genital surgeries”. Each health service is going to have an ethics committee that will take a decision in each case. Those decisions are going to be reviewed by the Central Ethics Committee (in the Ministry of Health), and under the scope of human rights – I’m fighting to be part of that.

Malta was the first country to prohibit “normalising” interventions on intersex infants and children through law, in April 2015. The Gender Identity Gender Expression and Sex Characteristics Act also provided for the establishment of a working group to develop protocols that meet human rights standards.

In Colombia, many legal constraints apply, but surgeries continue through limited enforcement and circumvention of judicial restrictions.

In Australia, flawed guidelines published in 2013 by the Victorian Department of Health continue to permit medical interventions for “psychosocial” reasons. They do not meet international human rights standards and, in practice, clinical practice is unchanged.