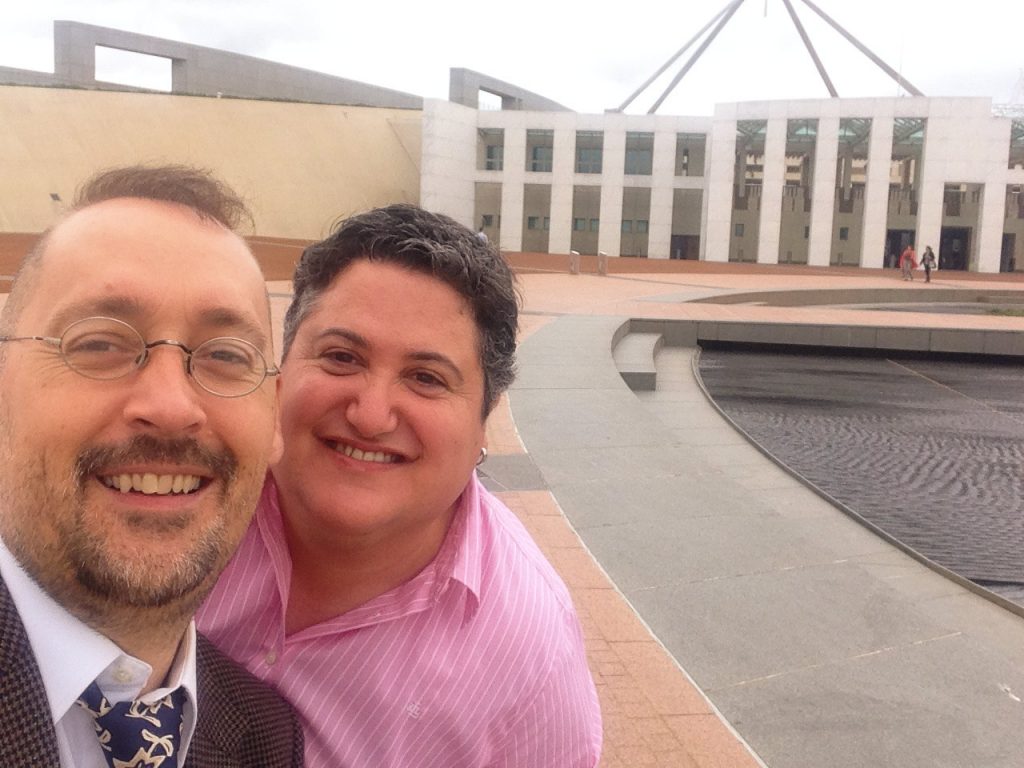 Morgan and Tony at the federal parliament in March 2014, about to hear the first Senate speeches on intersex health and human rights, following publication of a report of an inquiry on the involuntary or coerced sterilisation of intersex people in Australia

The Board of OII Australia is excited to announce that, after many years of operating entirely through the work of volunteers, our two co-chairs will become our joint Executive Directors as of 1 December 2016.

Both Tony Briffa and Morgan Carpenter will be contracted part time on systemic advocacy, health and human rights work for Australians with intersex traits. A key initial task will be to develop a business plan for the organisation, but we also expect both Morgan and Tony to increase our availability, our visibility and our engagement in Australia and internationally.

We would like to extend our grateful thanks to the funders who have made this possible.

“Being funded for our advocacy work is great news. It will help build our capacity as an organisation, but it also recognises the value of the work we have been doing for years as volunteers”, Morgan Carpenter said. “It is a credit to the many volunteers and board members that have given their time in support of intersex human rights in Australia.”

Tony Briffa was elected to the position of co-chair in November 2015, alongside Morgan Carpenter, after serving as vice-president. Tony is one of Australia’s first intersex advocates, appearing on 60 Minutes in 2000 and 2005, and published in Nature in 2004. Tony more recently presented a statement to the UN Human Rights Council, in 2014. Tony is also a councillor of Hobsons Bay in Melbourne, the first openly intersex person elected to public office and the world’s first openly intersex Mayor. An aviation engineer and specialist, Tony is a former president of the AISSGA, current vice-president of the AISSGA, a member of current and previous Victorian Ministerial Advisory Groups on LGBTI issues, and a board member of ILGA Oceania. Tony speaks nationally and internationally and has appeared on television, radio, magazines and newspapers discussing intersex human rights.

Morgan Carpenter was elected to the role of president in 2013 and joined Tony Briffa as co-chair from November 2015. A founding director of OII Australia, Morgan was diagnosed late, followed by multiple so-called “normalising” surgeries. Morgan wrote our submissions to Senate inquiries on anti-discrimination legislation, and involuntary or coerced sterilisation, and also participated in hearings on those inquiries. A social policy and bodily diversity consultant, Morgan participated in the first intersex expert meeting, organised by the UN, is an advisor to the first Intersex Human Rights Fund, managed by Astraea Lesbian Foundation for Justice, a founder of the independent Intersex Day project and a consultant to Global Action for Trans Equality. Morgan speaks nationally and internationally, and has been widely published. Morgan is currently completing a part time Master of Bioethics program at the University of Sydney Medical School.