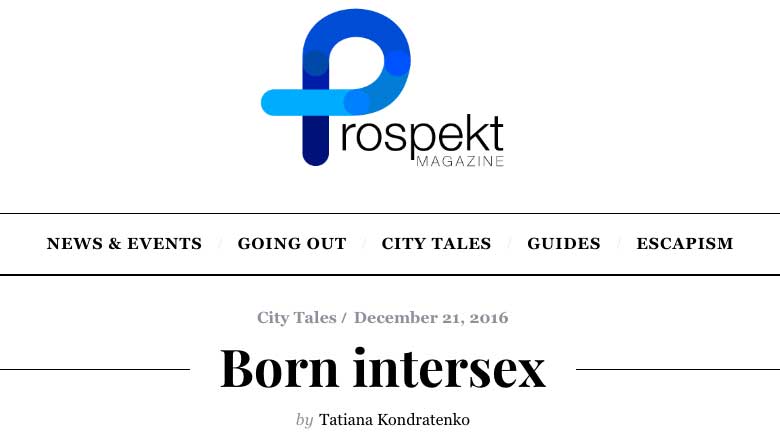 We’ve had interviews like this piece, by Prospekt Magazine. Telling our personal stories is always challenging, bringing old wounds back to the surface. Alexander Berezkin, the interviewee in this article by Tatiana Kondratenko about intersex people in Russia, is to be congratulated.

The problem with interviews like this is that Alexander’s story is incidental to the story in the journalist’s head, and that story doesn’t depend on facts.

Some countries, like Germany, Malta, Australia and New Zealand, added the third box corresponded to gender on the birth certificates. It gives parents of intersex infants the right to choose the third option: marking the sex category “X” or “other”. By doing so, parents and doctors are not forced to put intersex babies through surgeries that would turn them into male or female. Thus, as intersex children grow up, they have the right to realise their identity by themselves.

This report was published a couple of weeks after a series of news stories (and our case note) on an Australian Family Court case where parents’ right to sterilise their 5-year old child was upheld by the judge, coincidentally two years after a clitorectomy and labiaplasty: surgery that, the Court claimed, “enhanced the appearance of her female genitalia”.

It also comes after publication and reporting of a major report by Ulrike Klöppel on medical interventions in Germany between 2005 and 2014, showing no significant changes in the number of surgeries, just a change in clinical language, and a UN Committee on the Rights of the Child report on New Zealand calling for an end to the mutilation of intersex infants, children and adolescents. Malta, on the other hand, has an explicit legal prohibition of unnecessary modifications to the sex characteristics of children. The facts about surgical interventions are easy to find.

There’s an even broader issue here, and it illustrates a key flaw in diversity policies around intersex inclusion. While diversity teams and social policy teams make assumptions about intersex often as a third gender issue, a matter of classifications, pronouns and titles, this is not true of medicine. To clinicians, all children are boys or girls, it’s just that some have disorders that need to be fixed. This means that the Victorian Department of Health and Human Services will say this:

The Victorian Government values and celebrates diversity. It affirms the right to equality, fairness and decency for Lesbian, Gay, Bisexual, Trans and Gender Diverse, and Intersex (LGBTI) Victorians and is committed to removing discrimination from Victorian laws, services and society… Inclusion is about recognising and valuing diversity, including a diversity of sexualities, gender identities and intersex variations … ensuring that services are delivered in ways that are non-discriminatory and LGBTI inclusive and welcoming

At the same time that it says this:

Ambiguous genitalia in neonates … is rarely anticipated and can be a source of great distress for parents, delivery room and nursery staff … a medical emergency … Corrective surgery is usually undertaken within the first year of life … Very early surgery at under six months of age is less commonly performed than in the past

It means that a single Minister in the Australian Capital Territory (ACT) can write to me as the then president of OII Australia in 2014 and say this in one letter:

At the same time that she said this in another:

Currently in the ACT, in the event of a birth of a baby with a disorder of sex development (DSD), clinicians follow a standard investigation and management practice that is consistent with a national approach from the Australasian Paediatric Endocrine Group and international consensus statements from key disciplines such as paediatric endocrinology, surgery… it is recognised that surgery of this sort is best performed in centres of excellence. For this reason children with a DSD are normally referred to either Melbourne or Sydney.

There is still no consensual attitude regarding indications, timing, procedure and evaluation of outcome of DSD surgery. The levels of evidence of responses given by the experts are low … Timing, choice of the individual and irreversibility of surgical procedures are sources of concerns. There is no evidence regarding the impact of surgically treated or non-treated DSDs during childhood for the individual, the parents, society or the risk of stigmatization

Some clinicians – some IVF clinics also – will misrepresent intersex as a sex or gender, and so obscure a connection between their treatment of children with “disorders of sex development” and their governments’ policies on LGBTI inclusion. But, in any case, such clinicians are really treating the parents via medical interventions on children or embryos. This medical approach is what needs fixing.

Third sex or gender markers have a legitimate function for non-binary people, including both those who are intersex and non-intersex, and Australia has had these since at least 2003, but it is important to recognise their limitations. This also includes their limited utility for intersex people as a whole. The evidence we have is that 75% of people born with atypical sex characteristics are female/male, while 19% prefer other or X options. 60% self-describe using the word intersex, with a variety of other approaches. The latter is just like LGBT and other stigmatised populations where, for example, some men who have sex with men are gay men, others are queer, and others use other kinds of language if they use specific terms at all.

So, apologies that this is not a Christmas story. I hope it will actually help encourage more realism when it comes to reporting and policy-making on intersex issues.