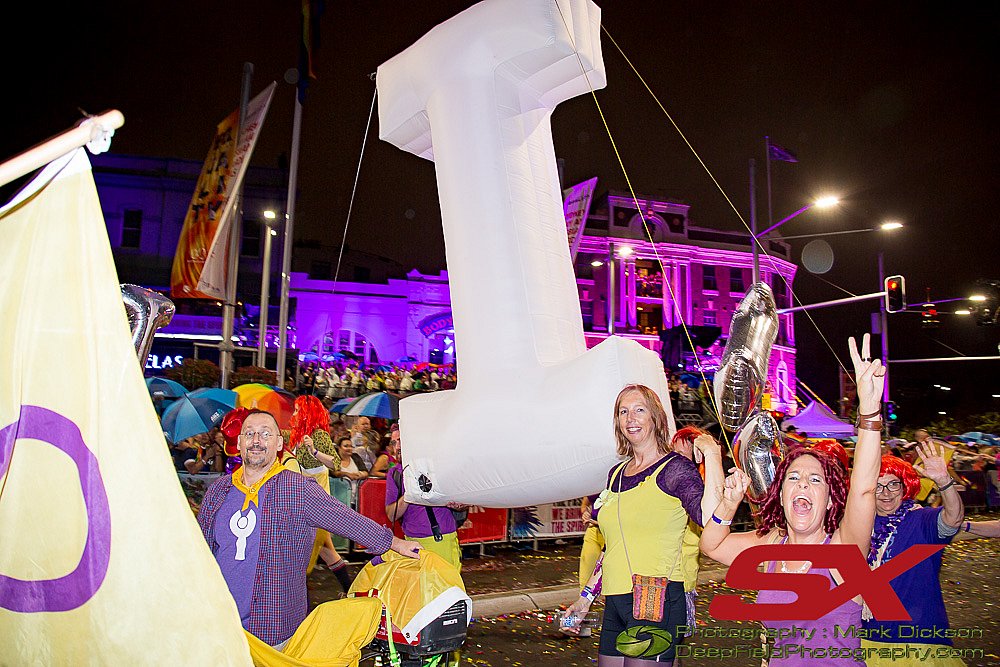 “I is for Intersex” photo of parade entry by Mark Dickson, for SX News. Thanks to Mark for permission to use.

Sydney, Australia – This year’s Mardi Gras Parade will see the participation of the largest number of people born with intersex bodies ever in a public event in Australia.

Members from many peer-run intersex organisations will be joined by other intersex individuals and allies in a float called ‘I is for Intersex’ which is set to make intersex visibility a highlight of the parade.

“Many people still don’t know what the I in LGBTI stands for and we are here to spell it out in no uncertain terms. Intersex exists, we are diverse and we celebrate our natural intersex bodies” says Bonnie Hart, president of the AIS Support Group Australia, one of the intersex organisations participating in the event.

The revellers will march in the main event of Sydney’s Mardi Gras under a giant inflatable rainbow letter “I”, wearing the colours yellow and purple of the intersex flag, and donning red hair. It is thought that up to 1.7% of the population has some intersex characteristic. “That’s about the same percentage as for people with red hair” says Hart. “It’s a very visual way of understanding how common intersex actually is, and it also exposes how the stigma, shame and secrecy about being born intersex keeps people hidden from each other and the public eye.”

Intersex people are born with a body that doesn’t conform to social stereotypes of females or males. These biological variations, which are present at birth, can be genetic, chromosomal or hormonal and result in a wide range of physical diversity within the intersex community. Because of these differences, and despite being otherwise healthy, many intersex children receive irreversible sex assignment interventions to make them appear more male or female.

The contentious practice of medically “fixing” intersex bodies has long been the target of local activists and in more recent years drawn the attention of international human rights bodies such as the United Nations.

Morgan Carpenter, co-executive director of OII Australia says, “the UN and many other human rights institutions have joined us in condemning irreversible so-called “sex normalising” interventions on the bodies of infants, children and adolescents with intersex variations. We know these unnecessary and harmful practices still happen around Australia. They have even been described in Court as creating surgically “enhanced” genitalia in young children, which belies the well-established risks that accompany them.”

Many of those marching in the ‘I is for Intersex’ float will be going public about being intersex for the first time. Picking up the courage to come out at Mardi Gras is a big step but a also a cause for celebration.

“I’m both petrified and excited to ‘come out’ as a proud intersex woman at this year’s Mardi Gras”, says C.J. from Adelaide. “If I can be brave now, perhaps those who will follow in my footsteps won’t have to suffer the same decades of shame, secrecy and silence. As far as a strategic moment to summon the guts to do it though, I can’t think of a better one. I might as well get the whole universe up to speed in one fell swoop while I’m surrounded by my intersex family and so many others celebrating their diversity!”

‘I is for Intersex’ will feature in the Sydney Gay and Lesbian Mardi Gras Parade on Saturday 4 March 2017.

ABC’s TripleJ Hack covered the intersex float at Sydney Mardi Gras in a news report on Monday 6 March 2017. Thank you to all the crew, especially Sarah McVeigh who stayed with us as we gathered. The segment includes powerful statements by Eve, Cody and Elise. Listen/download.

Sarah McVeigh at ABC’s TripleJ also wrote a story based around the interviews and our preparations for the parade: “The ‘I’ in LGBTQI: What it’s like growing up intersex”