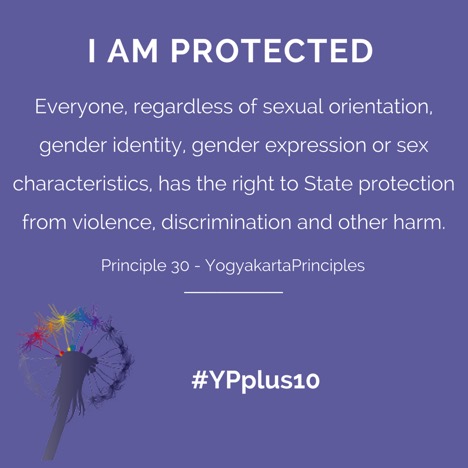 “Everyone, regardless of sexual orientation, gender identity, gender expression or sex characteristics, has the right to State protection from violence, discrimination and other harm” Principle 30 – Yogyakarta Principles

An important and long-awaited supplement to the Yogyakarta Principles is published today. The Principles apply international human rights law in relation to sexual orientation, gender identity, and now also gender expression and sex characteristics. Co-executive director Morgan Carpenter was a member of the drafting committee and is a signatory.

The original Principles briefly mention intersex in the preamble, and outline an important principle on freedom from medical abuses. However, those principles have not been effective in their application to the rights of intersex people. The Supplement addresses this.

On a systemic level, the concepts of sexual orientation and gender identity are not immediately relevant to a population of people born with intersex variations who have many different sexual orientations and gender identities. Simplistic applications of the Principles have tended to inappropriately reduce intersex issues to concepts that are a poor fit. While fear of non-normative identities is a rationale for medical abuses against intersex people, action to implement protections from violations on grounds of sexual orientation and gender identity have not provided intersex people with protection from the specific violations that we face. The introduction of a new ground of ‘sex characteristics’ addresses these issues. It is defined in the following way:

UNDERSTANDING ‘sex characteristics’ as each person’s physical features relating to sex, including genitalia and other sexual and reproductive anatomy, chromosomes, hormones, and secondary physical features emerging from puberty;

Intersex people are born with physical or biological sex characteristics (such as sexual anatomy, reproductive organs, hormonal patterns and/or chromosomal patterns) that do not fit the typical definitions for male or female bodies. For some intersex people these traits are apparent at birth, while for others they emerge later in life, often at puberty.[2]

Current Australian protections on grounds of intersex status are, in contrast, often incorrectly imputed to offer protections on grounds of identity or legal classification when, in reality, they refer to a purely biological definition irrespective of sex classification, gender identity or sexual orientation.[3] The attribute of ‘intersex status’ is also, at the same time, both based on a model of deficit (of what intersex people may lack), and also broad enough to include many acquired characteristics as well as innate characteristics (so as to avoid the introduction of a bona fide test). The universal attribute of ‘sex characteristics’ avoids these issues.

We hope that the inclusion of the new attribute will encourage people using lenses focused on sexuality and gender to adopt lenses also focused on sex characteristics.

“UNDERSTANDING ‘sex characteristics’ as each person’s physical features relating to sex, including genitalia and other sexual and reproductive anatomy, chromosomes, hormones, and secondary physical features emerging from puberty”

While Principle 18 calls for protection from medical abuses, the text was undermined by the way it referenced the interests of the child. As the UN Committee on the Rights of the Child has pointed out in the years since the Principles were first adopted, the best interests principle can (and has been) manipulated to justify violations of the right to bodily integrity.[4] The new Principles address these issues.

Principle 32 on the right to bodily and mental integrity recognises that forced and coercive medical practices violate human rights principles on freedom from torture, cruel, inhuman and degrading treatment – a principle which includes freedom from experimental treatment. Such practices also violate to the right to bodily integrity, a right that derives from the right to security. The principle requires free prior and informed consent except in situations of urgent necessity for medical treatment. It calls on governments to combat the stigma and stereotypes that underpin treatment. 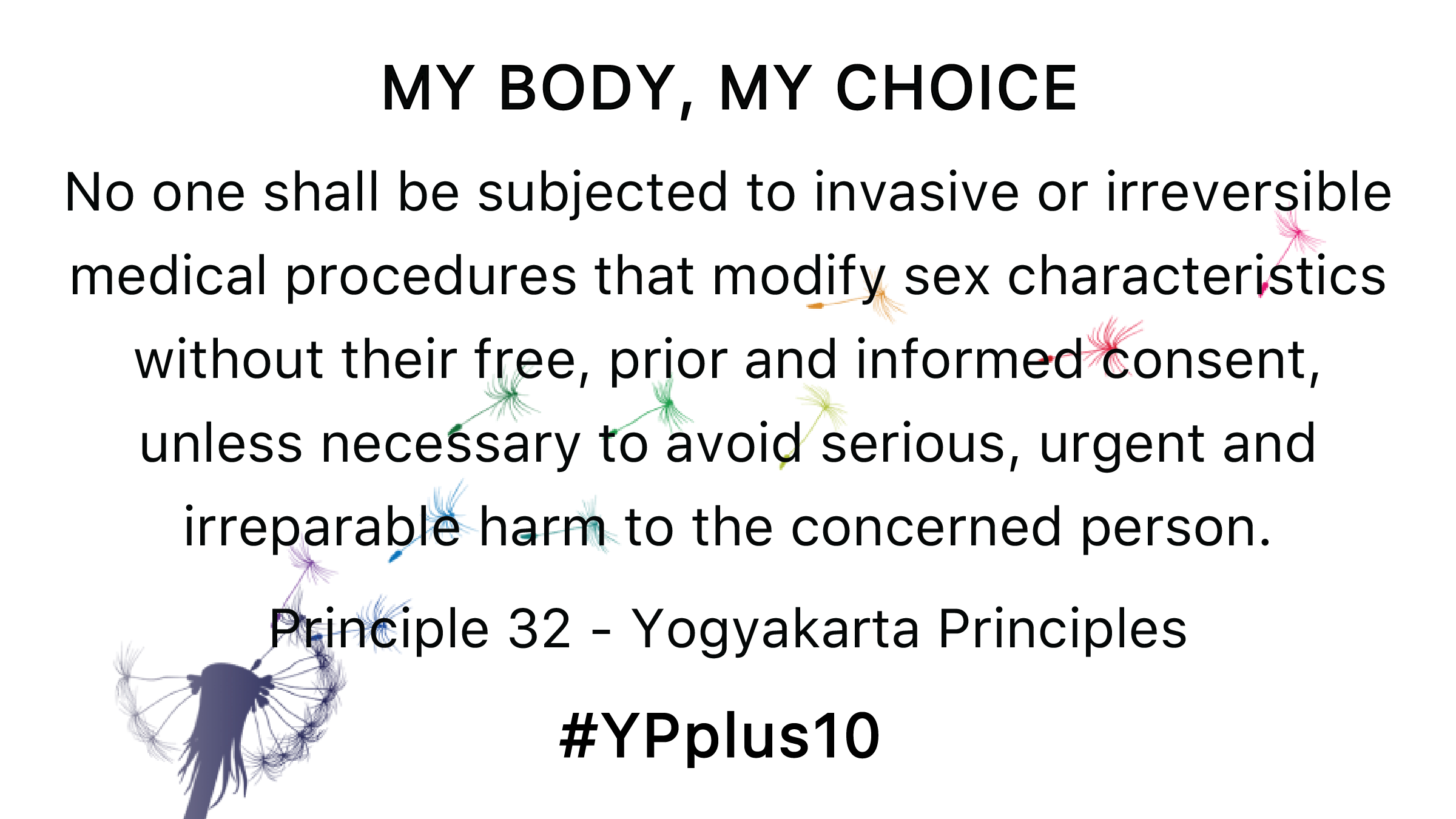 My Body, My Choice: “No one shall be subjected to invasive or irreversible medical procedure that modify sex characteristics without their free, prior and informed consent, unless necessary to avoid serious, urgent and irreparable harm to the concerned person.” Principle 32 – Yogyakarta Principles

The right to truth

This principle builds on rights established to combat impunity, including a right to the truth about individuals’ medical histories and access to redress, reparations and restorative treatments; and rights to preserve memory and guarantee the right to know.[5] The Supplement calls for this right to be exempted from statutes of limitations.

I know the truth: “Every victim of a human rights violation on the basis of sexual orientation, gender identity, gender expression or sex characteristics has the right to know the truth about the facts, circumstances and reasons why the violation occurred.” Principle 37 – Yogyakarta Principles

Principle 31 calls for an end to sex/gender registration for legal identification documents. The principle is based upon article 24 of the International Covenant on Civil and Political Rights[7] and article 7 of the Convention on the Rights of the Child.[8] These articles call for the registration of children with a name and a right to acquire a nationality.

Ending legal sex/gender registration may seem radical at first glance, but the International Covenant on Civil and Political Rights was signed over 50 years ago, in 1966. It (rightly) does not require classification according to any ‘biological’ or inherited characteristics. In doing so, the principle reflects an already often overlooked recommendation of the German Constitutional Court earlier this month,[9] and it also reflects intersex community statements that reflect concern about the creation of new or third sex/gender classifications.

The Principles outlines interim measures while legal systems require sex/gender on identification documents, including simple administrative mechanisms to change classifications, and recognition of multiple gender markers. We commend the use of universal terms in legislation and regulation, available to all and not only to intersex people. 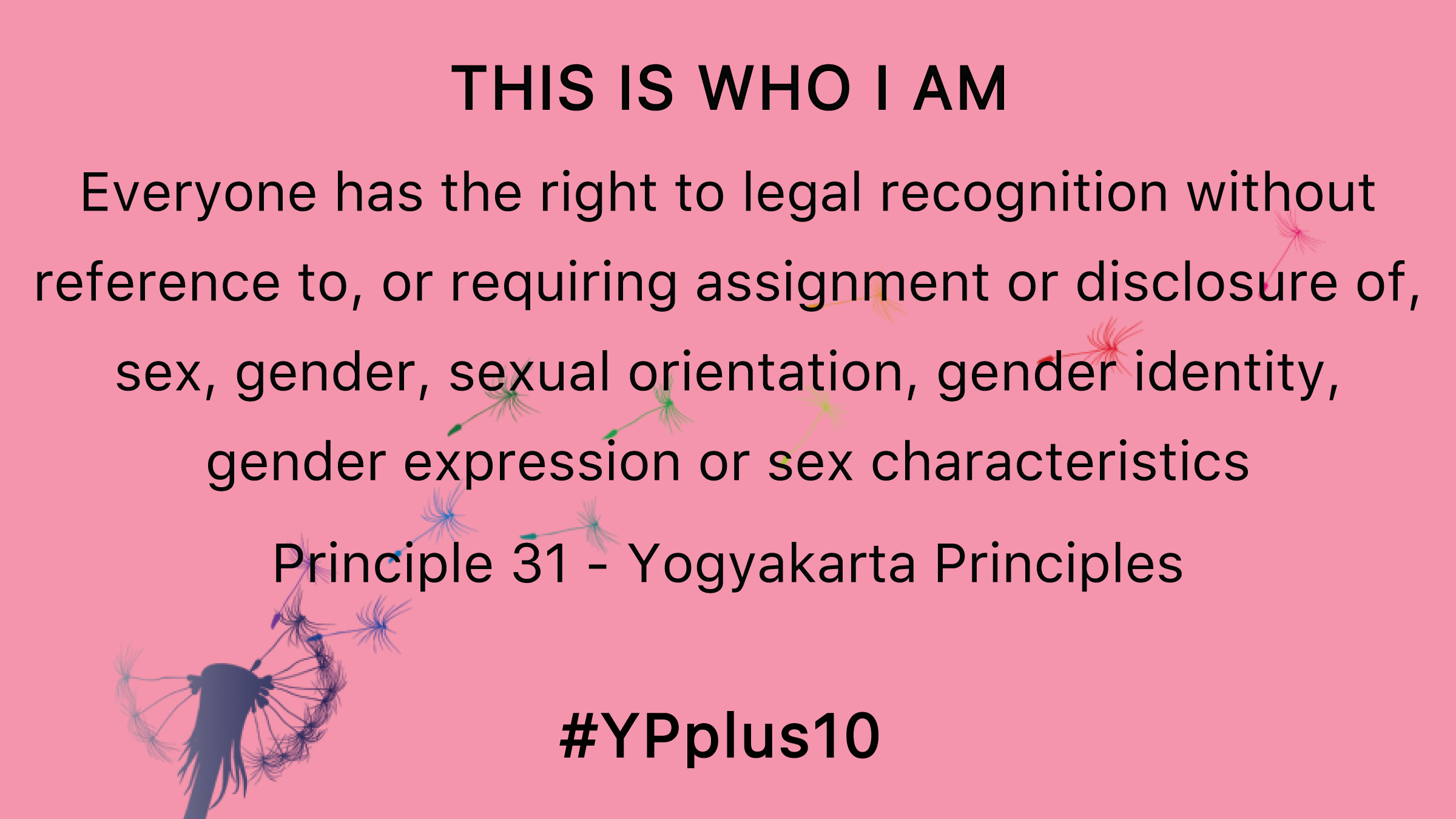 This is who I am: “Everyone has the right to legal recognition without reference to, or requiring assignment of disclosure of, sex, gender, sexual orientation, gender identity, gender expression or sex characteristics” Principle 31 – Yogyakarta Principles

A new State Obligation on non-discrimination in relation to prenatal interventions (2L-M) calls for an end to prenatal treatments and genetic selection that discriminate against intersex people on grounds of sex characteristics. This language reflects similar statements on the role of sex selection in discriminating against women.[6] The State obligation doesn’t call for prohibition of such technologies, because it is limited to existing norms in international human rights law. Recognising that human genetic modification is becoming technologically feasible, this is anticipated. 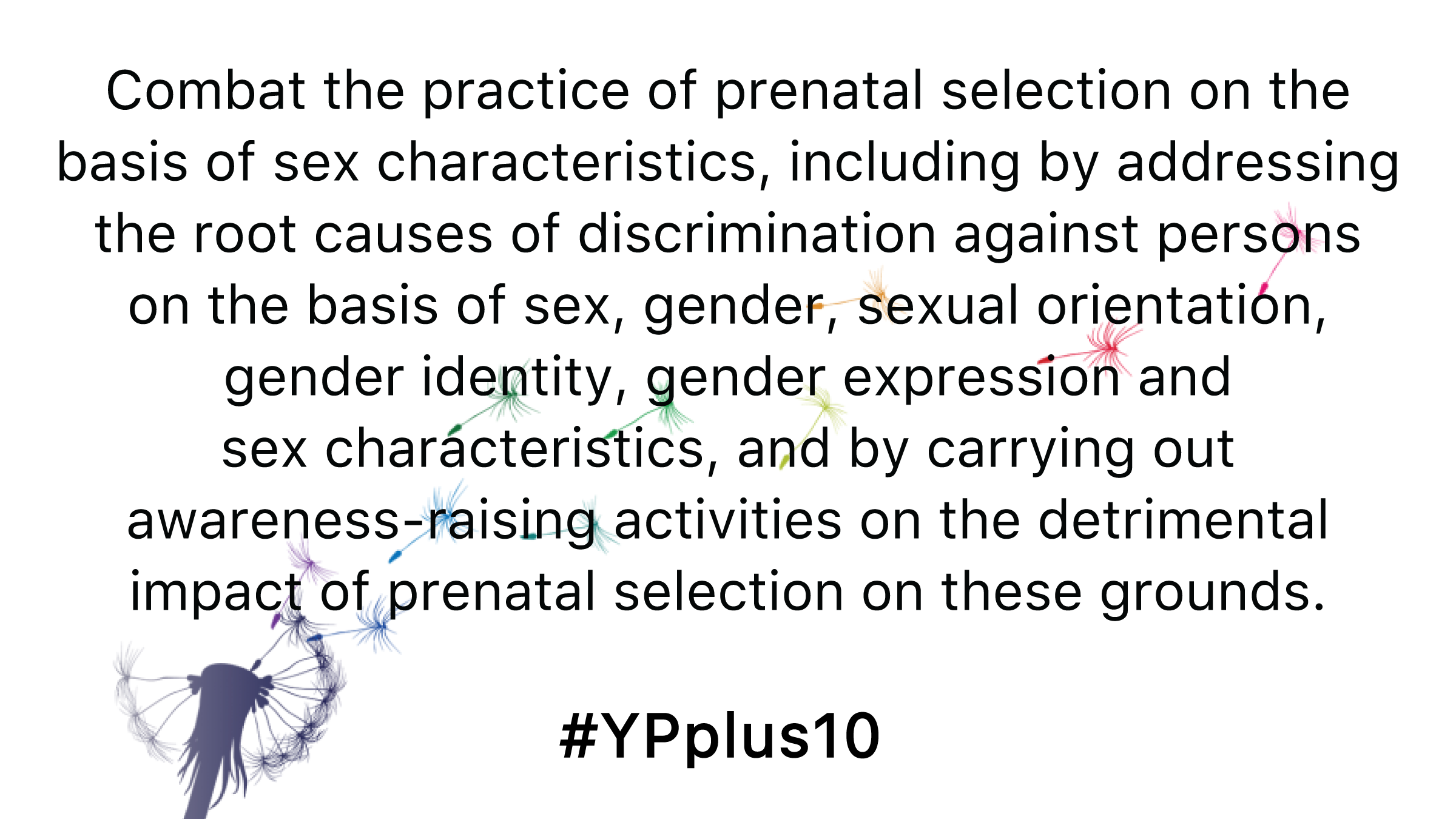 “Combat the practice of prenatal selection on the basis of sex characteristics, including by addressing the root causes of discrimination against persons on the basis of sex, gender, sexual orientation, gender identity, gender expression and sex characteristics, and by carrying out awareness-raising activities on the detrimental impact of prenatal selection on these grounds”

A new State Obligation to provide reasonable accommodations (2G) recognises that some intersex and other people may need support in education, employment and other contexts, whether due to acquired or innate health issues on grounds of sex characteristics. 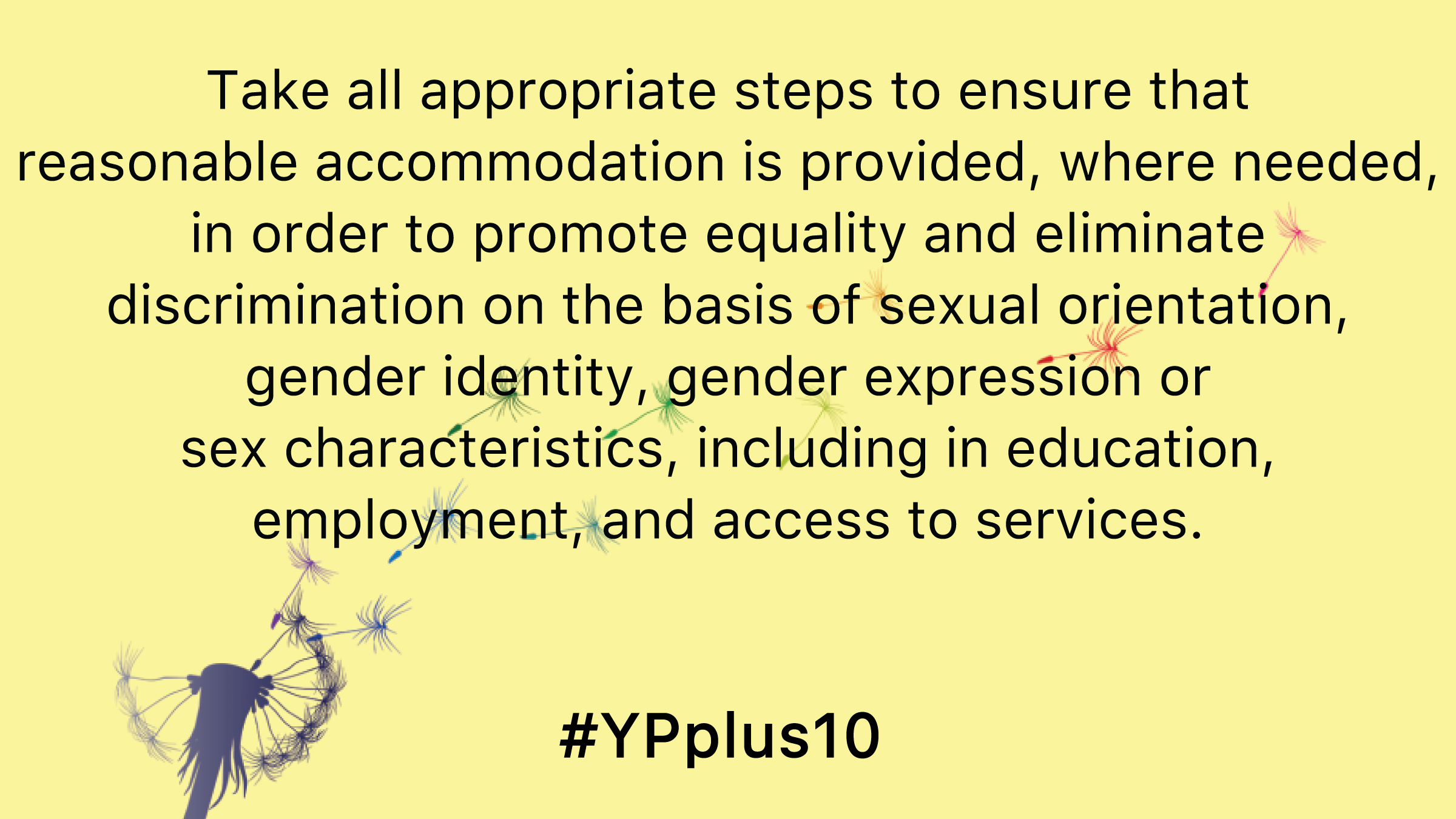 “Take all appropriate steps to ensure that reasonable accommodation is provided, where needed, in order to promote equality and eliminate discrimination on the basis of sexual orientation, gender identity, gender expression or sex characteristics, including in education, employment, and access to services”

Other principles and obligations

A number of other principles are included in the Supplement, including on the right to sanitation, state protection, protection from poverty, enjoyment on information and communication technologies, and on cultural diversity. The Principles already affirm access to healthcare and other rights. Additional obligations also focus on access to sport.

The Supplement to the Yogyakarta Principles is compatible with the 2017 Darlington Statement of Australian and Aotearoa/New Zealand intersex organisations and advocates.[10] Recognising limitations associated with ‘intersex status’, the Darlington Statement called for legal protections from discrimination and violence on the ground of ‘sex characteristics’.

The Supplement is also compatible with the international 2013 Malta Declaration.[11]

The Supplement was adopted at an expert meeting in Geneva on 20 September 2017. Invited experts in human rights, law, ethics, and medicine gathered from around the world. Morgan Carpenter (OII Australia co-executive director and consultant to GATE) was a member of the drafting committee and a co-chair in the expert meeting that approved the Supplement. Morgan was joined in both functions by Mauro Cabral Grinspan (GATE), and also at the expert meeting by Kimberly Zieselman (interACT). Many other experts participated in the process, including former Human Rights Commissioner and commissioner of the Australian Law Reform Commission, Chris Sidoti. Philip Alston, UN Special Rapporteur on extreme poverty and human right is also an Australian signatory.

Thank you to the drafting committee, experts, secretariat and funders! The Principles are not intended to be owned by any institution or population. They aim to apply international human rights law in ways that can be cited and used by governments, courts, and civil society.

[2] Office of the High Commissioner for Human Rights, African Commission on Human and Peoples’ Rights, Council of Europe, Office of the Commissioner for Human Rights, Inter-American Commission on Human Rights, Special Rapporteur on torture and other cruel, inhuman, or degrading treatment or punishment, Special Rapporteur on the right of everyone to the enjoyment of the highest attainable standard of physical and mental health, et al. Intersex Awareness Day – Wednesday 26 October. End violence and harmful medical practices on intersex children and adults, UN and regional experts urge. 2016. Available from: http://www.ohchr.org/EN/NewsEvents/Pages/DisplayNews.aspx?NewsID=20739&LangID=E

[5] Orentlicher D, Economic and Social Council. Report of the independent expert to update the Set of principles to combat impunity, Diane Orentlicher Addendum Updated Set of principles for the protection and promotion of human rights through action to combat impunity. UN Commission on Human Rights; 2005 Feb. Report No.: E/CN.4/2005/102/Add.1. Available from: http://undocs.org/E/CN.4/2005/102/Add.1
World Conference against Racism, Racial Discrimination, Xenophobia and Related Intolerance. Durban Declaration and Programme of Action. 2001, para 98. Available from: http://www.un.org/WCAR/durban.pdf

[8] United Nations. Convention on the Rights of the Child. 1989. Available from: http://www.ohchr.org/Documents/ProfessionalInterest/crc.pdf