Karin at OII Australia has obtained a PDF rendition of the autobiography of British intersex woman Roberta Cowell. It was published in the UK in 1954 and has long been out of print.

Roberta aka Betty underwent urogenital surgery in the early 1950s. She lived a long life, as a World War II fighter pilot and later as a racing driver. 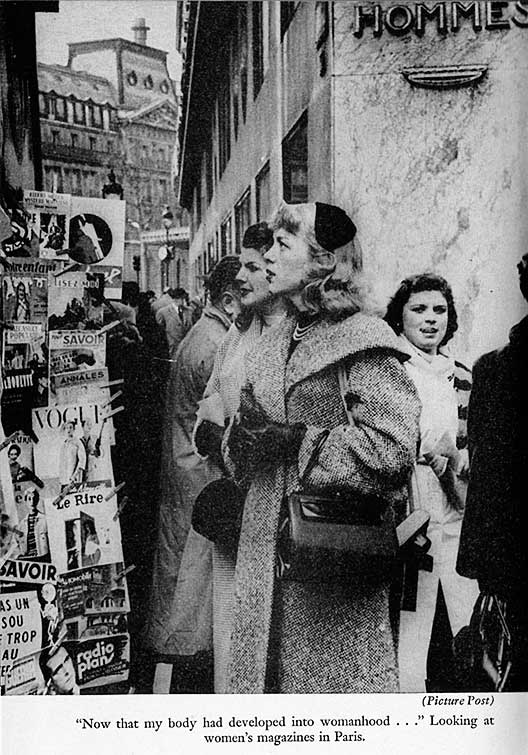 Here are some intriguing quotes from Roberta’s autobiography…

A few days later I was in the Harley Street consulting-room of a famous sexologist. He was very kind and understanding. After hearing my story he gave me a thorough physical examination. Then I learned something about myself which made a great deal of difference to my acceptance of my situation.

He gave it as his considered opinion that my body showed quite prominent feminine sex characteristics: wide hips and narrow shoulders, pelvis female in type, hair distribution and skin female in type. Other female traits included the absence of laryngeal relief (no Adam’s apple) and a tendency of the lower limbs to converge towards the knees.

My breast formation was examined and judged to be typically feminine though very little developed. The recent development, I was told, was due to an alteration in gland balance and perhaps in gland structure. The cause might possibly have been a series of emotional upsets. There seemed to be some degree of hermaphroditism present; how extensive the hermaphroditism was could not be decided without a more detailed examination and laboratory tests. There was a possibility that some of the internal organs might be female. …

My case was taken over by a brilliant woman doctor, a specialist in glands. I was examined by two gynaecologists, a professor of anatomy, two general practitioners, and another endocrinologist. After all these examinations and tests, it was decided that my case was a very unusual one indeed, and apparently unique of its type—certainly unique in British medical history. …

What seemed to surprise the experts was not so much that I was so feminine, but that I was so masculine. They thought that my body had begun to change quite a long time before I became aware of it, probably about ten years before they saw me. …

What remained to be done involved a series of operations. Although my sex was now predominantly female, there was still a lot of the masculine in my body. I was definitely a woman, but just as definitely an abnormal one. The general pattern of change in my body had been well established, and the physicians were certain that I would remain abnormal until nature’s mistake had been put right surgically, and all traces of masculinisation removed.

He read medical books extensively, and became convinced that his internal organs were abnormal. At forty he was a desperately unhappy person, contemplating suicide. Then he met a German doctor who was prepared to help him.

Examinations revealed that his body had undoubted female conformation. He underwent a series of operations. The presence of rudimentary ovaries was established, and ovarian tissue from a healthy young woman of twenty-six was transplanted into him. This technique, of course, has been superseded by modern hormone therapy.

A new passport was issued by the Danish authorities, in the name of Lili Elbe. The King of Denmark declared Einar’s marriage annulled, and his wife married a mutual friend. A French painter who was also a friend of old standing fell in love with Lili. But before Lili could marry she had to have one more operation. This was to enable her to function completely as a wife and mother. The operation was successfully carried out, but shortly afterwards Lili died of heart trouble.

Some time before her death her story had leaked out through an indiscreet friend. It caused a great sensation in 1931. I did not hear of Lili’s case until my own treatment was well under way. When I read the book about her life I noticed many similarities between her history and mine.

On Professor R. Goldschmidt, who coined the term ‘intersex’ in 1901:

PROFESSOR R. Goldschmidt, of Berlin, has made a special study of anomalies in animals and plants, and he has evolved a theory about intersexes in human beings. His theory is that all human intersexes were originally intended to be female; that is, the egg from which they came was fertilised by a sperm possessing female-type sex chromosomes.

Every cell in the body of the intersex is therefore female, and will always remain so. But disturbances during the growth period may cause changes in the development of the body structure, changes so drastic that the baby may develop normal male organs and glands.