A National Police Certificate check is increasingly required by potential employers of all kinds before Australians will be considered for employment.

This has left many intersex people living in fear of discovery and rejection, especially those of us who were assigned one sex at birth but who are in fact the other sex, both sexes or neither sex and who have gone on to live as our  true selves.

A number of intersex people as well as transsexual and transgender people in Australia have told stories of applying for jobs, going through the NPC checking process as well as potential employers contacting their referees and former employers, and finding that they have been rejected for employment. In one or two cases complainants were specifically told that irregularities were found in their background and thus they were to no longer be considered.

Accordingly, OII Australia is in the process of investigating each Australian state’s police check procedures.

Here is the reply letter about this issue that we received from the South Australia Police. 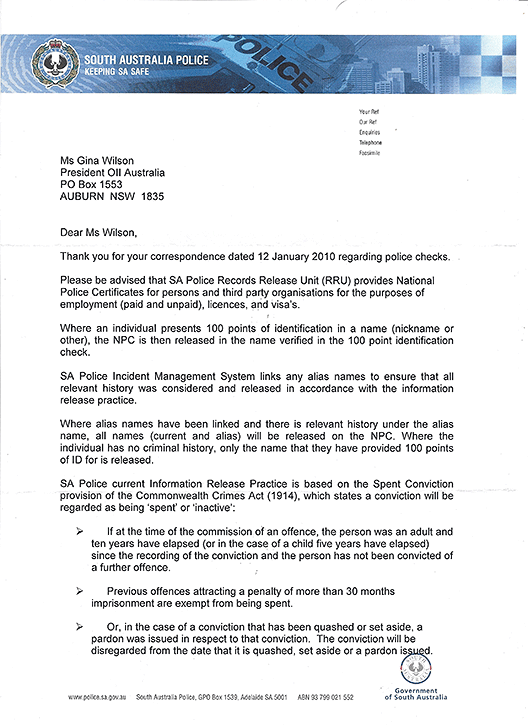 Question: Is the applicant always the individual to whom the NPC applies?

Answer: Yes. Because of privacy laws the Records Release Unit (RRU) cannot release documents to a third party and an individual cannot consent for a third party to apply on their behalf. That means that in South Australia if you need an NPC you have to apply, it will be sent to you, and it is up to you whether you pass that information on.

Question: Can you explain the use of the word ‘alias’ by South Australia Police and do you refer to all previous names as ‘alias’ on NPC?

Answer: The word ‘alias’ is a technical term used by police to refer to any name used by a person when they come into contact with police. Maiden names, unanglicized ethnic names, nicknames and so on, are all referred to as an ‘alias’. On the NPC ‘alias’ names are referred to as being “previously Known as” or “also Known as”.

If no contact has been had with police in a previous name they will have no record of that name and it will not appear on NPCs.

It is gratifying to note that the SA police do not link name changes to any birth registries and nor do they rely on the list held by the Therapeutic Goods Administration (TGA).

The South Australia Police rely entirely on their own records and those they share with federal and interstate police in determining if an individual has a notifiable conviction. The NPC is a national check.