WE, the undersigned, support the members of the Organisation Intersex International, in their demands that: 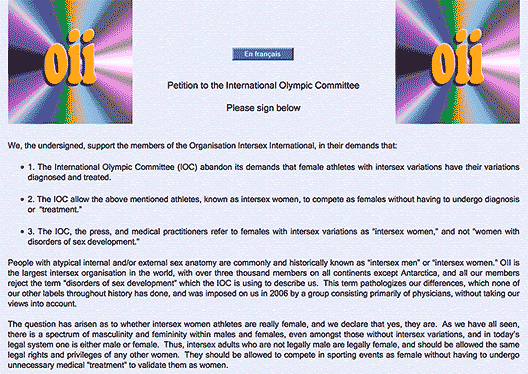 People with atypical internal and/or external sex anatomy are commonly and historically known as “intersex men” or “intersex women.” OII is the largest intersex organisation in the world, with over three thousand members on all continents except Antarctica, and all our members reject the term “disorders of sex development” which the IOC is using to describe us. This term pathologizes our differences, which none of our other labels throughout history has done, and was imposed on us in 2006 by a group consisting primarily of physicians, without taking our views into account.

The question has arisen as to whether intersex women athletes are really female, and we declare that yes, they are. As we have all seen, there is a spectrum of masculinity and femininity within males and females, even amongst those without intersex variations, and in today’s legal system one is either male or female. Thus, intersex adults who are not legally male are legally female, and should be allowed the same legal rights and privileges of any other women. They should be allowed to compete in sporting events as female without having to undergo unnecessary medical “treatment” to validate them as women.

The IOC claims “Athletes’ health might be endangered if their disorders are not diagnosed and treated,”[1] but only a very small percentage of women with intersex variations have any health issues related to their variations. Some have “salt-wasting syndrome,” and some have internal testes which may be at risk for becoming cancerous. Both of these risks can be tested for and acted on if necessary.

However, the IOC states, “Those who agree to be treated will be permitted to participate. Those who do not… will not be permitted.”[2] Thus health is not the real motivator for “diagnosis” and “treatment.” If it were, the IOC would require all female athletes to be “treated,” as all women with ovaries are at risk for ovarian cancer.

The IOC is falsely framing their demands as a health issue to obfuscate the fact that they are singling out women they deem overly masculine and forcing them to “fix,” i.e. “feminize,” their “masculine characteristics” in order to compete. We believe this is astoundingly discriminatory.

The issue which intersex female athletes present is one of “fairness.” However, as many have pointed out, unfair physical advantages are endemic to sports. Men with low testosterone levels have been muscled out of medals since sports began without calling for their rivals to be banned from competition. The only fair solution is for the IOC to celebrate, not regulate, “masculine” women’s physical talents, just as it does men’s.

For information about the 2012 Olympics and sex testing, please see this petition, and these articles.