Important note: this paper should not be regarded as a guide to our current policy and practices in relation to bodily integrity and the impact of harmful practices, and it is not maintained as a living document. Our approaches have been informed by community-building and evidence-building, and are defined (as of March 2017) in the Darlington Statement. For information specifically on nomenclature, see our media and style page. 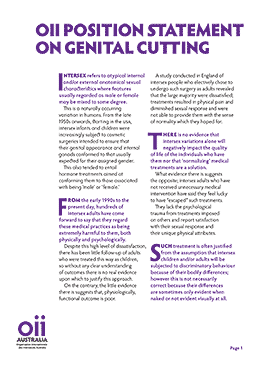 Intersex refers to atypical internal and/or external anatomical sexual characteristics, where features usually regarded as male or female may be mixed to some degree. This is a naturally occurring variation in humans. From the late 1950s onwards, starting in the USA, intersex infants and children were increasingly subject to cosmetic surgeries intended to ensure that their genital appearance and internal gonads conformed to that usually expected for their assigned gender. This also tended to entail hormone treatments aimed at conforming them to those associated with being ‘male’ or ‘female.’

From the early 1990s to the present day, hundreds of intersex adults have come forward to say that they regard these medical practices as being extremely harmful to them, both physically and psychologically. Despite this high level of dissatisfaction, there has been little follow-up of adults who were treated this way as children, so without any clear understanding of outcomes, there is no real evidence upon which to justify this approach. On the contrary, the little evidence there is suggests that physiologically, functional outcome is poor. A study conducted in England of intersex people who electively chose to undergo such surgery as adults revealed that the large majority were dissatisfied; treatments resulted in physical pain and diminished sexual response, and were not able to provide them with the sense of normality which they hoped for.

There is no evidence that intersex variations alone will negatively impact the quality of life of the individuals who have them, nor that ‘normalizing’ medical treatments are a solution. What evidence there is suggests the opposite; intersex adults who have not received unnecessary medical intervention have said they feel lucky to have “escaped” such treatments. They lack the psychological trauma from treatments imposed on others, and report satisfaction with their sexual response and their unique physical attributes.

Such treatment is often justified from the assumption that intersex children and/or adults will be subjected to discriminatory behaviour because of their bodily differences; however, this is not necessarily correct, because their differences are sometimes only evident when naked, or not evident visually at all. Where differences are visible, this is no different from the situation of people from other minority groups. The solution to such challenges is not to alter the characteristics themselves, but to combat the prejudicial attitudes that stigmatize.

Cosmetic surgery on intersex genitals appears to harm intersex infants, children, and even adults, yet it still persists. As with male circumcision, it is often driven by parental desire to provide their children with bodies that conform to certain beliefs about how genitals should be. Also, the presumption that atypical sex anatomy will result in atypical sexual orientation and/or gender identity, homophobia and a fear of atypical gender presentation are seen by some intersex people as the motivation driving these surgeries. In many societies today, gender expression and sexual orientation are seen as a human right, and this is recognized by the UN. Performing unnecessary surgeries on infants and children in order to influence adult sexual orientation and/or gender identity outcomes should be seen as a human rights abuse. There is no evidence that sexual orientation or gender identity are affected by genital surgery one way or the other.

We seek recognition that all humans have the right to autonomy over their own bodies, including their genitals, and so on. Because infants and children are too young to assert their autonomy, they should not be subjected to unnecessary surgeries which may irrevocably harm them, and which they may not have chosen as adults. We recognize that cases requiring medical treatment for the maintenance of health or preservation of life should be managed as with any other situation where a child needs treatment. Intersex infants and children should be raised without cosmetic surgery and/or steroidal hormones until they are old enough to decide for themselves whether they wish to undergo these procedures and treatments or not.

We recommend avoidance of genital cutting, where possible, until a child can fully participate in decision making. This would be worked towards through communication between parents of intersex children, the children themselves, intersex adults, support groups, and clinicians who are sensitive to the needs of the child. Counseling should be available for those affected by the situation, to ensure they are fully informed and equipped to make the best decisions. Wider education about intersex as a human variation is also necessary; the cultural anxiety and social pressure that encourage surgery, hormone therapy and physical conformity need to be addressed. Through a process that includes education, communication, and counseling, then public shame will decrease, along with a reduction of cultural anxiety and social pressure, ultimately allowing people the liberty to maintain autonomy over their own bodies.