However much sympathy we have in this tragic circumstance, we cannot help but be alarmed at the way CAH individuals are being portrayed. 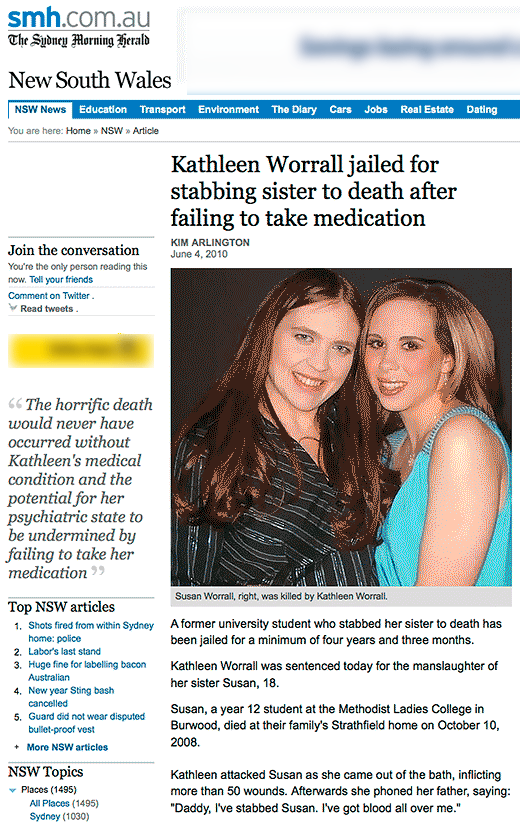 While it is understandable that a defense team might use every means at their disposal to have their client acquitted or the sentence minimized, the publicity this case has received paints those of us with Congenital Adrenal Hyperplasia in a very bad light indeed.

CAH is not a mood-altering disorder as has been reported. CAH individuals generally contend with salt-wasting and a lack of cortisone (the hormone that helps the body to react to physical injury). High testosterone levels do not of themselves give rise to homicidal ideation.

Press reports elsewhere suggest that Kathleen Worrall may have suffered from bipolar disorder, and this may not have been effectively treated.

The Crown accepted she had been substantially impaired by a “disability of the mind”.

The “horrific death” would never have occurred without Kathleen’s medical condition and the potential for her psychiatric state to be undermined by failing to take her medication, she said. …

I didn’t take cortisone for 13 years. My sister is still alive.

One swallow doesn’t make a summer

many thanks for your comment JMB. JMB is well known to OII Australia and we can attest to the veracity of their statement

What the media has not accurately reported is that Kathleen was diagnosed with bipolar after the attack and was in a manic state before and after the attack. Instead of accurately reporting what the mood-altering disorder or her psychiatric state was (bipolar), the phrases mood-altering has been lumped in with CAH. Both the defense and witnesses for the prosecution argued that her very erratic compliance with treatment for CAH may have added to her emotional instability in the months beforehand (but not caused psychiatric disturbance itself). It was the mood disorder, not CAH, that affected her actions/decisions at the time of the offence.

Considering the very very poor reporting of the case in general, it is unfortunately not surprising that CAH has been portrayed in the way it has. The media latched onto CAH in the days following what happened as they had found she was a member of CAH groups on Facebook. Like other aspects of the case (e.g. “killed over a hair straightener”), the media has held on to misleading and inaccurate elements that they reported in the days after the killing.