Tony Briffa is interviewed in The Age:

Hobsons Bay deputy mayor Tony Briffa is thought to be the only person to describe his sex as “other” in the Victorian Local Governance Association survey of the numbers of males and females in local government.

The Altona ward councillor was born with an intersex condition, which caused him to be incorrectly assigned as female as a child. Asked why he described himself as “other” when he fought so hard to be male, Cr Briffa sets the record straight. 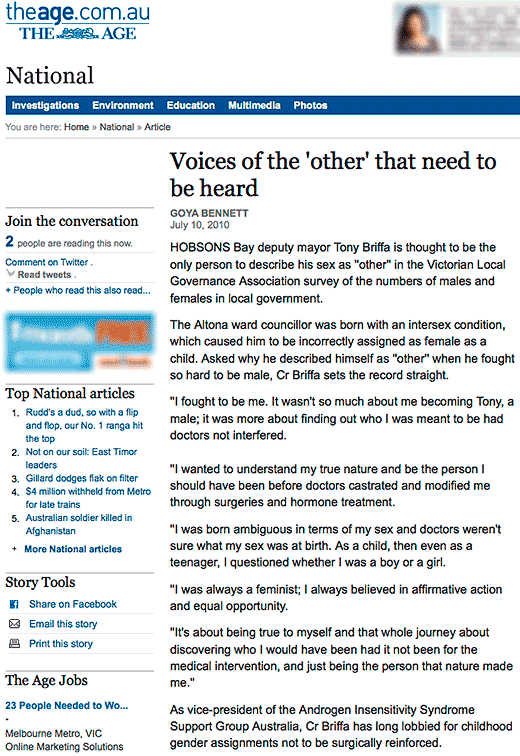 “I fought to be me. It wasn’t so much about me becoming Tony, a male; it was more about finding out who I was meant to be had doctors not interfered.

“I wanted to understand my true nature and be the person I should have been before doctors castrated and modified me through surgeries and hormone treatment.

“I was born ambiguous in terms of my sex and doctors weren’t sure what my sex was at birth. As a child, then even as a teenager, I questioned whether I was a boy or a girl.

“I was always a feminist; I always believed in affirmative action and equal opportunity.

“It’s about being true to myself and that whole journey about discovering who I would have been had it not been for the medical intervention, and just being the person that nature made me.”…