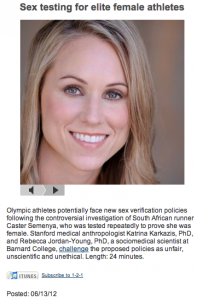 Katrina Karkazis and Rebecca Jordan-Young talk in an important Stanford School of Medicine podcast on the testing of female athletes to identify – and compel treatment of – those with intersex traits: 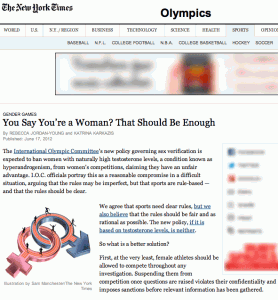 Rebecca Jordan-Young and Katrina Karkazis had an article in the New York Times on 17 June:

Sex segregation may obscure other gender inequities in sports. Men, for example, have 40 more events in the Olympics and have longer distances and durations — with no clear rationale.

Sex segregation is probably a good idea in some sports, at some levels and at some moments. But it is time to refocus policy discussions at every level so that sex segregation is one means to achieve fairness, not the ultimate goal. Ensuring gender equity through access to opportunity is just as important.

Unlike in doping cases, women with hyperandrogenism have not cheated. There is no reason to disqualify women whose bodies produce any of the complex ingredients that add up to athleticism, be they superb vision, big lungs, flexibility, long legs or testosterone.

The obsessive focus on sex has done enough harm. María José Martínez-Patiño, whose hurdling career was derailed by sex testing, said a new policy based on testosterone levels would further the “decades-long persecution of women in sports.” As she told us, “It’s enough.”