Tony Briffa was a co-executive director between December 2016 and May 2021, alongside Morgan Carpenter and is now a vice-chair. Tony is one of Australia’s first intersex advocates, appearing on 60 Minutes in 2000 and 2005, and published in Nature in 2004. Tony more recently presented a statement to the UN Human Rights Council, in 2014. She is also a councillor of Hobsons Bay in Melbourne, the first openly intersex person elected to public office and the world’s first openly intersex Mayor. An aviation engineer and specialist, she is a former president of Intersex Peer Support Australia (IPSA) (also known as AISSGA), co-chair of the Victorian government’s intersex expert advisory group, a member of current and previous Victorian Ministerial Advisory Groups on LGBTI issues, a board member of ILGA Oceania and chair of the intersex committee of ILGA World. Tony speaks nationally and internationally and has appeared on television, radio, magazines and newspapers discussing intersex human rights. She is a Justice of the Peace and former Bail Justice in Victoria.

Morgan is a bioethicist and executive director of IHRA (a part-time role). A director since IHRA registered as a not-for-profit company in 2010, Morgan Carpenter has served in numerous board positions, including president. Morgan was diagnosed late, followed by multiple so-called “normalising” surgeries. Morgan wrote our submissions to Senate inquiries on anti-discrimination legislation, and involuntary or coerced sterilisation, and also participated in hearings on those inquiries. He participated in the first intersex expert meeting, organised by the UN. He was an expert and drafting committee member for the Yogyakarta Principles plus 10 and has consulted or been a reference group member for the UN Office of the High Commissioner for Human Rights, the World Health Organization, the ACT government, GATE, Australian Human Rights Commission, Australian Bureau of Statistics, NSW Health, and other bodies. He designed the intersex flag. Morgan is also a PhD candidate in bioethics at Sydney Health Ethics, University of Sydney, and a Justice of the Peace in NSW.

Alice de Jonge SJD, PhD is a senior lecturer in law at Monash Business School, Monash University, where she lectures on aspects of public and private international law. Alice is a long term member of the Faculty Equity, Diversity and Social Inclusion Committee, the University “Diverse Genders, Sexes and Sexualities Advisory Group”, and the Monash NTEU Branch Committee. She has taught at university institutions in Southeast Asia, China, Europe and South Africa. She has published extensively on topics of international law, human rights and gender diversity, and volunteers as a lawyer for Refugee Legal, Victoria. Alice joined the board at the 2021 AGM and is a vice-chair of IHRA. 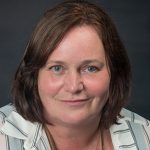 Aileen Kennedy PhD spent ten years in legal practice and seven years in legal academia prior to commencing at the University of New England in 2003. Her research is in the area of health law, currently focusing on the law relating to cosmetic surgery, female genital mutilation, voluntary amputation and other non-therapeutic body modifications. A focus of her research is on legal and ethical issues relating to biotechnological innovation such as assisted reproductive technology, genetics and neuroscience. She is interested in feminist theory, particularly theories of embodiment. Aileen recently completed a PhD in law at the University of Technology Sydney. Her thesis focused on the influence of neuroscience in regulating sex and gender surgery on children. From our 2021 AGM, Aileen is secretary of IHRA.

Agli Zavros-Orr PhD (a person with an intersex variation – 46XY Swyers), became a director in 2019, and co-chair on 17 November 2019. They bring to the board a strong background in education. Agli has worked as an early childhood and primary teacher and is a teacher educator. Their doctoral studies focused on the ethics of care, school leadership, teacher’s work and supportive school environments. Agli has held various academic leadership roles (including course co-ordinator and director roles) across five Australian universities and has informed the writing of degrees and authored numerous early years, primary and secondary teacher education courses. Their expertise is in curriculum and pedagogies – with a focus on social justice and anti-bias approaches. Agli is a co-founder of Diversitywise Educational Services. Since 2013 Agli has advocated for the needs of children with an intersex variation in their work with pre-service teachers. Agli has served as the Intersex Peer Support Australia (ISPA) representative for Victoria and Tasmania and is a member of the Victorian Government Intersex Advisory Group (IEAG). They have presented at conferences, has been a keynote speaker, an intersex community representative on various panels, a member of various online forums and have spoken on radio on several occasions on issues around intersex human rights.