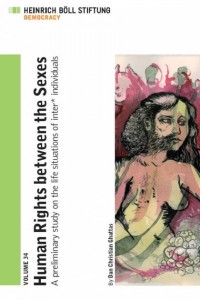 In November 2013, Dr Dan Christian Ghattas of OII Germany, together with the Heinrich Böll Foundation, published a preliminary study on the human rights of intersex people in 12 countries around the world, including Australia, along with Belgium, France, Germany, New Zealand, Serbia, South Africa, Taiwan, Turkey, Uganda, Ukraine, and Uruguay. While a preliminary study, for methodological reasons, this is the first research that we are aware of that provides a full, comparative analysis of the legal, medical and social status of intersex people. Ghattas says:

Intersex individuals are considered individuals with a «disorder» in all areas in which Western medicine prevails. They are more or less obviously treated as sick or «abnormal», depending on the respective society.

The full report is recommended reading. It is available as a free, downloadable PDF.

Incidentally, the cover image is by artist and OII Germany spokesperson Ins A Kromminga.