A German court has become the first in the world to find a surgeon guilty of conducting non-consensual surgery on an intersex child. Christiane Völling has finally been awarded damages in her long-running court case against the German surgeon who removed her reproductive organs. 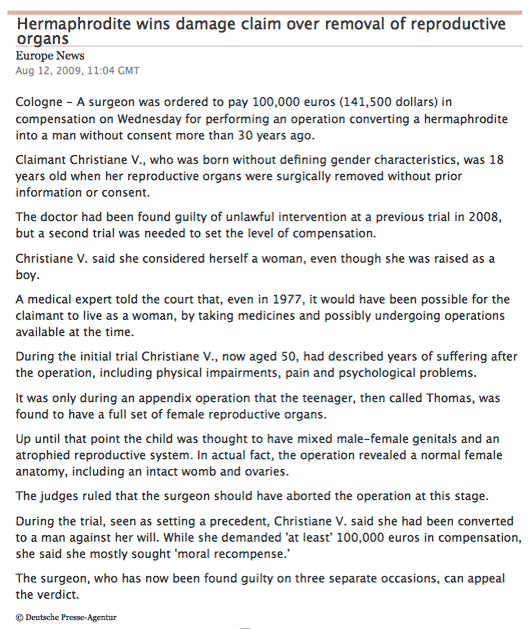 Cologne – A surgeon was ordered to pay 100,000 euros (141,500 dollars) in compensation on Wednesday for performing an operation converting a hermaphrodite into a man without consent more than 30 years ago.

Claimant Christiane V., who was born without defining gender characteristics, was 18 years old when her reproductive organs were surgically removed without prior information or consent. The doctor had been found guilty of unlawful intervention at a previous trial in 2008, but a second trial was needed to set the level of compensation.

Christiane V. said she considered herself a woman, even though she was raised as a boy. A medical expert told the court that, even in 1977, it would have been possible for the claimant to live as a woman, by taking medicines and possibly undergoing operations available at the time.

During the initial trial Christiane V., now aged 50, had described years of suffering after the operation, including physical impairments, pain and psychological problems. It was only during an appendix operation that the teenager, then called Thomas, was found to have a full set of female reproductive organs. Up until that point the child was thought to have mixed male-female genitals and an atrophied reproductive system. In actual fact, the operation revealed a normal female anatomy, including an intact womb and ovaries.

The judges ruled that the surgeon should have aborted the operation at this stage. During the trial, seen as setting a precedent, Christiane V. said she had been converted to a man against her will. While she demanded ‘at least’ 100,000 euros in compensation, she said she mostly sought ‘moral recompense.’ The surgeon, who has now been found guilty on three separate occasions, can appeal the verdict.

For the first time ever, a surgeon has been held accountable in a civil suit for non-consensual castration of an intersex person. The decision was upheld at all levels of the German judicial system.

According to information from Christiane Völling, the surgeon, Prof. Dr. L. will not appeal the latest judgement after losing for the third time, and he has already paid the damages! This is a victory from beginning to end for Christiane and her courageous lawyer, Georg Groth.

The payment [of damages] brought the “Hermtrial” which has been ongoing for over two years to an historic end more quickly than expected: for the first time ever in Germany a surgeon has been held accountable in a civil suit for non-consensual castration of an intersexed person – and the decision was upheld at all levels of the judicial system!

Sent by Nella from zwischengeschlecht.org.